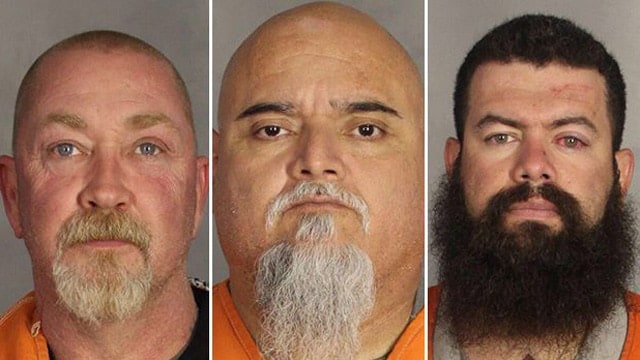 Those likely to stand trial first will be either Jerry Edward Pierson, left, Christopher Julian Carrizal, or Christopher Jacob Carrizal, all members of the Banditos. (Photo: McLennan County Sheriff’s Office)

Nearly two years after nine people were killed and 18 wounded in a shootout between rival biker clubs and law enforcement outside of a Waco Twin Peaks restaurant, the first of more than 150 of those indicted will begin their trials.

While the defense pushed to dismiss some charges and for quick trials, Johnson said it’s not uncommon for trials to begin up to two years after an incident occurred, especially given the complexity of the cases.

“It’s not like we had a shortage of cases before Twin Peaks came along,” Strother said. “It’s just the vagaries of the system, the complexity of the cases and the sheer volume that is present in the criminal justice system.”

It’s likely that the first defendant to stand trial will be either Christopher Jacob Carrizal, his father, Christopher Julian Carrizal, or Jerry Edward Pierson. All three are members of the Banditos and are represented by the same attorney, Landon Northcutt, who has not offered comment since the trial dates were disclosed.

Although federal authorities were also on the scene at the time of the shootout, three officers with the Waco Police Department were cleared of any wrongdoing in September.

Altogether, 44 shell casings were recovered from the scene and an autopsy revealed that four of the deceased bikers were struck with bullets from a .223-caliber rifle, the same type weapon commonly carried by law enforcement officers. However, Brent Stroman, who was the Waco police chief at the time of the shooting, remained adamant that his officers collectively fired just 12 of those shots.

While witnesses and authorities alike say a fight broke out between the two biker groups outside of the restaurant over a parking space and an apparent feeling of disrespect, it still remains unclear who fired the first or fatal shots.

Following the May 2015 shooting, part of which was captured on surveillance video, 155 bikers belonging to both the Banditos and Cossacks motorcycle clubs were indicted for engaging in organized criminal activity. It’s unknown what other charges, if any, the bikers are facing, as the cases have been shrouded in gag orders and redacted information.