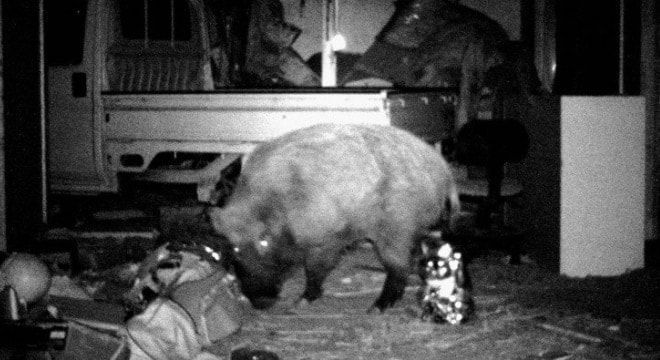 The “most adaptable animals that you’ll ever find” are running rampant across parts of rural Japan in the wake of the 2011 nuclear catastrophe and strict gun laws aren’t helping.

The Fukushima Daiichi nuclear disaster, in which a boiling water reactor nuclear power plant largely went Chernobyl after a tsunami knocked it offline has left Japan with a host of problems to include radiation-induced health impacts, some 200,000 displaced locals and possible exposure of groundwater to melted down nuclear fuel for decades to come.

Oh yeah, and the wild hogs.

According to an article in The Washington Post last April, the boar population, lacking natural predators is booming. Worse, thousands of the animals roam an area where highly radioactive caesium-137, which has a half-life of 30 years, has been confirmed.

Most agree that the best way to eradicate the rapid population of would-be Orcs is through hunting, but in gun control-friendly Japan, that is easier said than done.

“Something that complicates wild boar management in Japan is the exceptionally restrictive ownership, use, and access to firearms,” says Dr. Mark Smith, a forestry and wildlife professor at Auburn University, told Outside online. “This includes not only the general populace, but also with researchers, wildlife biologists, and natural resource managers.”

According to the Australian-based Small Arms Survey, the rate of private gun ownership in Japan is 0.6 per 100 people with only 77 handguns in circulation and just 0.8 percent of Japanese households containing one or more legal guns, most often shotguns.

Smith went to Japan to study the problem in 2013.

“Although [recreational] hunting does occur in Japan, it is very limited,” says Smith, “and hunter numbers are declining by the year, so there are fewer and fewer hunters out there harvesting wild boar.”

Plus there is the problem with the meat. In short, there is no good way to make caesium-137 infused pork a balanced part of your complete meal without the diner glowing in the dark, no matter how much BBQ sauce you use.

In Japan, they have to incinerate the carcasses (at 1,771 degrees Fahrenheit) then obliterate the fragments left over with hammers and box them up. Carefully.

Furthermore, the animals are very smart.

“They are the most adaptable animals that you’ll ever find: we call them the ‘opportunistic omnivore,’” says Smith.