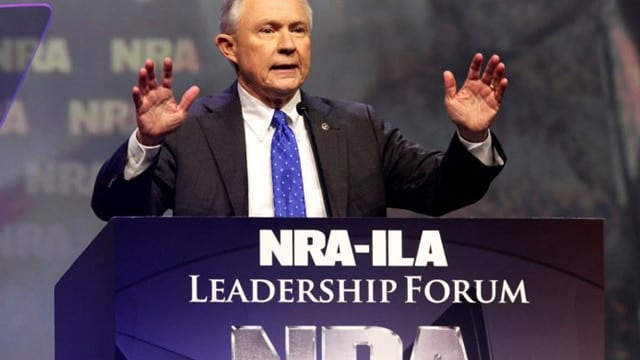 Sen. Jeff Session, a Republican from Alabama, speaking at the NRA annual convention.

Chris Cox, executive director of the NRA Institute for Legislative Action, shared his comment on Twitter alongside an article discussing Chicago’s lack of answers for reducing gun violence.

The city clocked in 754 homicides and 4,338 shooting victims in 2016, an increase of roughly 50 percent in both categories, according to the article by the Chicago Tribune. Hindered by allegations of corruption and increased public scrutiny, authorities have struggled to keep the violence at bay.

Last year both the city and state passed measures increasing the penalty for those who traffic firearms into Illinois for the purpose of selling them into the black market. City authorities have also advocated increased prison sentences for repeat violent offenders. Yet, crime researchers who study violence are unsure about what has caused the spike in violence in the Windy City, so it’s unclear how the new laws will affect crime.

While Cox and the NRA offered criticisms of Chicago leaders, they provided little as a solution. In the past the gun lobby has advocated improving enforcement of federal gun laws to reduce gun violence, but the organization also routinely lobbies to limit the federal agency tasked with enforcing them. They argue efforts by the Bureau of Alcohol, Tobacco, Firearms and Explosives have targeted law abiding citizens rather than violent offenders.

Trump’s nominee, Alabama Sen. Jeff Sessions, would oversee the ATF along with the rest of the Justice Department and operate under the directive of the “law and order” candidate. Sessions, who endorsed Trump early on in his campaign, is a Republican with an A-rating by the NRA. The organization praised Trump’s decision and called Sessions a champion of Second Amendment rights.

Sessions will face a two-day confirmation hearing in front of the Senate Judiciary Committee beginning Jan. 10.