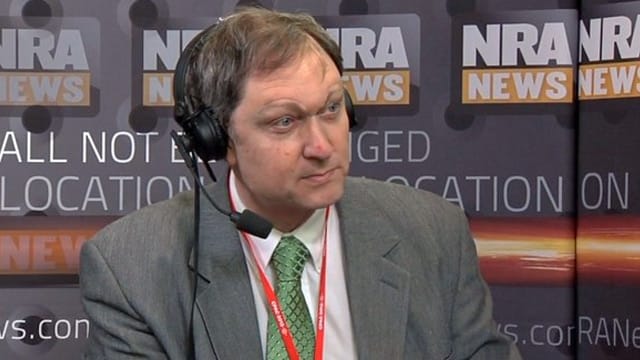 Dr. John R. Lott is an economist and the president of the Crime Prevention Research Center. (Photo: NRAnews.com)

“Just because someone can’t manage his finances doesn’t mean that he’s a danger to others,” said Lott, who likened the requirements to a literacy test for voting, in a column published by the National Review.

“What is next? Keeping guns away from people who can’t drive or do math? What about other rights? Should ‘financially incompetent’ people be forbidden from voting or making other decisions?” he asked.

Under the rule, the Social Security Administration will report social security beneficiaries who meet the specific criteria to the FBI’s National Instant Criminal Background Check System as prohibited buyers. Standards include those “adjudicated as a mental defective,” older than 18 and younger than retirement age, and receiving monthly checks through a “representative payee.” In other words, for any number of reasons, they don’t manage their own finances.

The Obama administration proposed the idea in the wake of the 2012 Sandy Hook school shooting as a means to strengthen gun control in the face of a Congress unwilling to further that agenda. The NRA has called the rule the “largest gun grab in American history.”

The gun lobby argued the SSA’s process would strip one of his or her civil liberties and that it makes no provision for an individual to attend a formal hearing for defending arguments. “It only involves anonymous bureaucrats reviewing documents in a government-compiled file,” reads an NRA analysis.

While they’ll be able to petition to have their gun rights restored, Lott said the rule is dangerous. “We need to face the reality that seemingly ‘reasonable’ gun-control measures such as the background-check system overwhelmingly disarm law-abiding people rather than criminals, which leads to higher crime rates,” he said. “Neither the elderly nor other law-abiding vulnerable people are done any favors when we disarm them.”

An estimated 75,000 people per year could be reported by the SSA to the FBI. The rule takes effect Jan. 18, but compliance won’t be mandatory until Dec. 19.