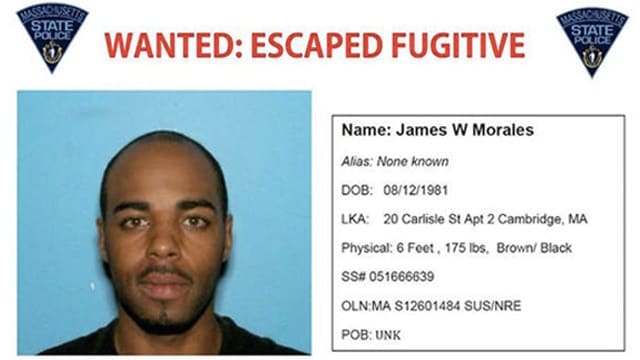 Law enforcement officials out of Rhode Island along with federal authorities are asking for the public’s help in locating a wanted fugitive who escaped from a federal prison in Central Falls Saturday night.

James Morales, 35, is believed to have broken out of the Donald W. Wyatt Detention Facility around 7 p.m. by climbing on top of a basketball hoop, then crawling through a razor wire fence, Jamie A. Hainsworth, United States Marshal for the District of Rhode Island, said in a press conference.

After Morales’ escape, a K-9 unit with the Massachusetts State Police located blood-stained prison garb in Attleboro, about 10 miles northeast of the prison. Authorities say Morales stole a car, which was recovered in the Framingham area, about 50 miles north of the facility.

Morales, who was not discovered missing until around 11:30 p.m., was arrested in November 2015 after he stole 16 weapons from the Lincoln W. Stoddard U.S. Army Reserve Center armory in Worcester, Massachusetts.

When the guns were stolen, Morales, who is a former Army reservist, was wearing an electronic monitoring device as the result of what Massachusetts State Police described as a “violent and brutal sexual assault of a child” in Middlesex County. Investigators say the device helped place Morales at the armory at the time of the robbery and DNA evidence further linked him to the crime.

Authorities say they are working around the clock to capture Morales and warn that he should be considered armed and extremely dangerous.

Morales, who has a large eagle tattoo on the left side of his neck and numerous other tattoos on his chest, arms and hands, likely suffered significant lacerations during his escape. He was last seen wearing gray sweatpants, a gray sweatshirt, and black sneakers. He also had a beard at the time of his escape.

Hainsworth said if Morales is seen, do not approach him, but immediately call 911. Any information about Morales can be relayed to the U.S. Marshals Service at 1-800-336-0102.