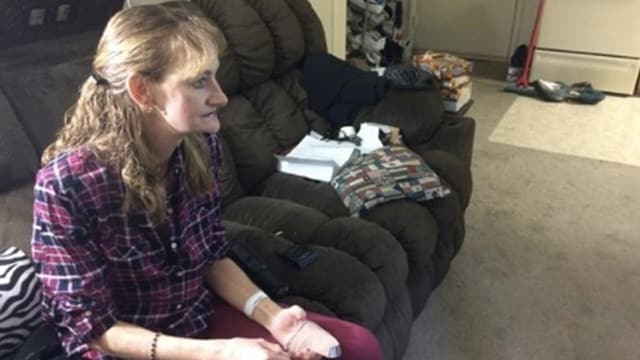 A career criminal was fatally shot in a Wilmington, North Carolina, apartment Monday night after his victim, who was bound and gagged, wriggled free and grabbed her gun.

Police confirmed in a press release the perpetrator, 35-year-old Willie Franklin Stith III, was found dead near the front door of the apartment around 11 p.m.

Kay Dickinson said she was returning home from work when she passed Stith in the hallway of her apartment complex. Stith was carrying what appeared to be a bag of garbage and Dickinson later told reporters she remembered thinking it was strange for him to be taking out the trash that time of night but nonetheless went on about her business.

Dickinson had her keys and a drink in one hand and her cell phone in the other and as soon as she unlocked the door to her apartment, Stith quickly turned back around and forced her inside. Dickinson said she could see that Stith was armed with a gun.

The two became involved in a tussle inside the apartment, but Stith got the upper hand and bound Dickinson’s hands behind her with a belt and wrapped a cell phone charger cord around her mouth. Dickinson said when he first pinned her in the kitchen, she was afraid he was going to kill her, but when he bound her and took her to the bedroom, she then feared he was going to rape her.

But Stith left Dickinson tied up in the bedroom while he explored the rest of her home. While Stith was rummaging through the apartment, Dickinson was able to get her hands free and, unbeknown to Stith, she kept a handgun near her bed.

Dickinson retrieved the gun, then fired a single shot, striking Stith in the chest. Stith ran down the hallway but collapsed before getting out of the apartment.

Dickinson then called 911 as she listened to Stith grunting while he laid on the floor.

“I didn’t know if he was alive or dead,” she recalled.

Dickinson said police arrived within just a few minutes and quickly took her out of the apartment. She was taken to the hospital to receive treatment for minor injuries she sustained during the altercation, which she said altogether only lasted five to seven minutes and still seems very much surreal. Meanwhile, investigators took her gun, the bedspread from her bed and the items Stith used to tie her up.

Dickinson, who feels it was a targeted attack, said she’s unsure how, but Stith knew not only her name but her boyfriend’s name as well. She said she purchased her gun just over a year ago, but Monday night was the first time she ever fired it.

Court records show Stith, a convicted felon, had a lengthy criminal history with more than a dozen convictions in six years. His convictions ranged from burglary and breaking and entering to assault, as well as numerous drug and weapons charges.

The incident remains under investigation and, thus far, no charges have been filed against Dickinson, who appears to have acted in self-defense. Once the investigation is completed, the case will be turned over to the New Hanover County District Attorney’s Office for review.