Ruger begins 2017 with a bang, offering expanded options in the Predator line and American Pistol Compact series of guns as well as introducing a brand new rimfire rifle.

Ruger’s American Rimfire Target model is the latest from the company and offers plinkers one more option on the range. (Photo: Sturm, Ruger & Co.)

Announced earlier this week, the American Rimfire Target Rifle seeks to give target shooters another option on the range. The new long gun is chambered in .22 LR, .22 WMR and .17 HMR and features a free-floated, 1/2 -28 inch threaded barrel.

Equipped with an adjustable trigger and Picatinny rail, the Rimfire Target utilizes an Alexander Henry forend for steadier aiming on the range. Built on a lightweight, black laminate stock with rubber buttpad, the rifle tips the scales at just under 7 pounds.

Though it ships with a detachable rotary magazine, Ruger has designed the Rimfire Target model to accept 10/22 mags as well.

Shooters can find the newest model to Ruger’s rimfire lineup on dealer shelves for $499.

Ruger’s Predator series of rifles is getting a long-range boost with the addition of the Vortex Crossfire II. The new package — with chamberings in .204 Ruger, .223, 6.5 Creedmoor and .308 WIN — pairs the lightweight rifle with the aluminum tubed Vortex.

The Predator line of rifles features a medium contoured, cold-hammer forged barrel with perks such as an adjustable trigger and tang safety.

The Vortex Predator package retails for $699. 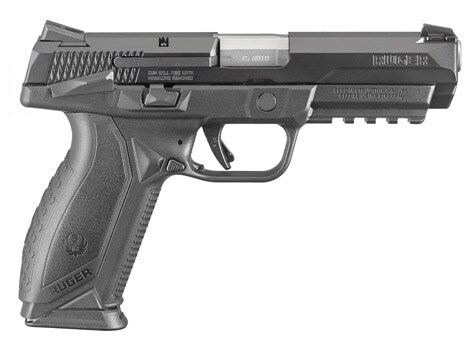 Introduced in December 2015, the Ruger American Pistol Compact line will see the addition of a .45 Auto variant. The .45 model will ship in the “pro” configuration with no external, manual safety. Featuring a 3.75-inch barrel on a 7.25-inch frame, the compact pistol clearly targets concealed carry fans who prefer a little oomph in firepower.

The handgun, retailing for $579, ships with one 10 round extended magazine and one seven-round magazine.