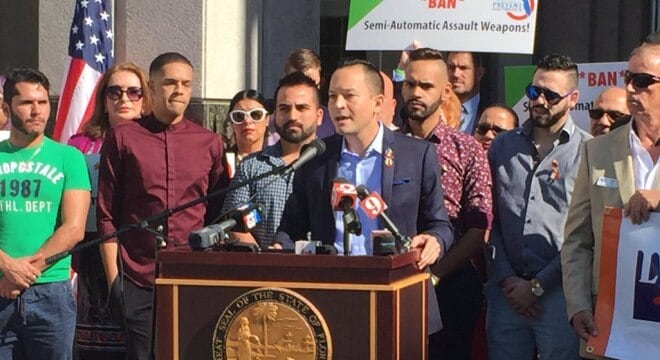 Orlando-area lawmakers, using the Pulse nightclub terror attack as a call to action, have filed legislation to ban some semi-automatic firearms and their magazines to Florida.

Sponsored in the state Senate by Sen. Linda Stewart and in the House by Rep. Carlos Guillermo Smith, both Democrats, the measure would ban the sale or transfer of certain classes of firearms based on their cosmetic features while mandating such guns currently in circulation be registered.

Smith, noted for being the first openly LGBT Latino elected to the Florida House, said the state needed no more tragedies like the Pulse shooting which left 49 dead at the Orlando nightclub last June.

“Assault weapons are the gold standard for mass murder. They are weapons of war, designed for war and have no place on our streets or in civilian hands,” said Smith at a press conference Thursday. “We all have the right to defend ourselves and our families with a firearm, but nobody needs military-style assault weapons to do it.”

The legislation, SB-254/HB-167, would add a definition to Florida law for “assault weapons,” listing all AR and AK series firearms by name as well as another 70 types ranging from Hi-Point and M-1 Carbines to some variants of Chiappa .22 rifles and Barrett .50 calibers.

Moving past the enumerated guns, the 16-page bill would classify a wide range of firearms with cosmetic features such as a telescoping or folding stock, bayonet mount or barrel shroud, as an assault weapon. Shotguns capable of holding more than five rounds in a fixed magazine would likewise earn the classification as would pistols weighing more than 50 ounces.

Those selling or transferring such firearms would face up to two years in prison as violations would be a third-degree felony. Simple possession of an assault weapon or large capacity magazine — one capable of holding 10 or more cartridges under the proposed law — would earn a year in prison.

Should the measure pass into law, Floridians who already legally own affected firearms or magazines could keep them, providing they obtain a certificate of possession.

The proposal is backed by the Florida Coalition to Prevent Gun Violence, an offshoot of the state’s League of Women Voters Gun Safety Committee, who promised to bring such legislation last fall.

“We are no longer going to allow the NRA to dictate gun laws in Florida,” said Patti Brigham, co-chair of the Coalition.

“Florida cannot wait nor do we have to wait for our federal government to take action. We can and should follow the lead of seven other states that already have in effect what we are proposing today,” Brigham said.

The state’s powerful gun rights champion, Marion Hammer, executive director of the Unified Sportsmen of Florida and a former National Rifle Association president, told Guns.com the newfound drive to bring a weapon ban to the Sunshine State is just a rebranding of a bad idea that has failed in the past.

“This bill is like a ‘bad penny’ that keeps turning up,” said Hammer. “It’s useless, a waste of time, won’t do anybody any good, and can’t be justified. When are they going to learn that gun bans and gun control don’t work?”

Hammer said she had seen versions of the same bill pop up repeatedly over the years.

The legislation is awaiting committee assignment, though it faces unlikely passage.

Republicans hold easy majorities in both chambers and Gov. Rick Scott, a Republican who endorsed Donald Trump for president, has a history of supporting pro-gun initiatives.