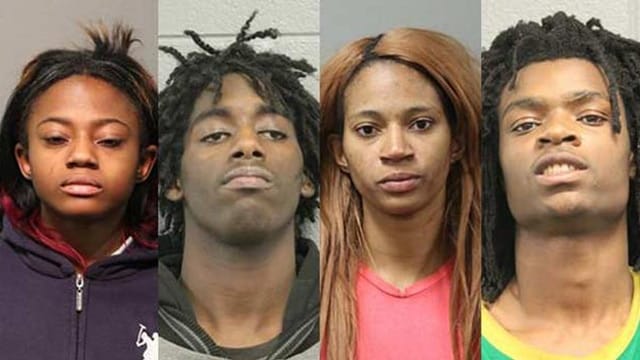 Hate crime charges came as a result of the totality of the circumstances, including the victim’s mental capacity, the fact that they tied him up, and the blatant racist remarks and disparaging comments about the victim’s diminished mental ability made throughout the assault, authorities said during a press conference Thursday.

The suspects were identified as Brittany Covington, 18; Tesfaye Cooper, 18; Jordan Hill, 18; and Tanishia Covington, 24. In addition to the hate crime, they have been charged with kidnapping, aggravated battery and aggravated unlawful restraint.

Authorities said investigators had been considering the incident a hate crime from the beginning, but wanted to ensure the investigation was based on facts and not emotion.

Authorities explained the 18-year-old victim had attended school with Hill before the incident and they planned to spend New Year’s Eve together, but the attack does not appear to be premeditated.

Hill met the victim at a suburban McDonald’s on the night of Dec. 31. He had stolen the van earlier, something the victim did not know. They spent two days together — visiting friends and, the victim at least, sleeping in the van — before arriving at the Covington sisters’ apartment on Jan. 3.

According to statements taken by investigators, at some point, Hill and the victim started “play fighting,” which escalated to the point that the Covington sisters became agitated with the victim. The four cornered him in the apartment, bound his hands, covered his mouth with tape and cut up his clothes with a knife. They also admitted to hitting and kicking him.

For four to five hours, the group kept the victim tied up as they attacked and berated him. The video shows them forcing him to drink toilet water and at one point cutting his scalp with a knife. Also, at some point, the suspects sent text messages to the victim’s family, taunting them and saying they were holding him captive.

The victim managed to escape after a neighbor complained about noise coming from the apartment. Angered at the neighbor who threatened to call police if the noise continued, the sisters walked downstairs and kicked in the neighbor’s door and then the neighbor called 911. Left unattended, the victim freed himself.

The officer responding to the call saw the victim, who looked bloody, battered, disoriented and was wearing clothes inappropriate for outside in Chicago’s cold weather.

Authorities learned the victim had been reported missing by his parents on Jan. 2. They brought him to the hospital for medical treatment and arrested the suspects.

Authorities said there does not appear to be a clear motive for the assault and think the situation had escalated into violence rather than thoughtfully planned. They also noted that none of the suspects have showed any sort of remorse for their actions.

The family of the victim spoke briefly with reporters. They said they cannot comprehend why someone would do this to him, thanked everyone for their support and prayers, and asked for continued privacy and prayers for the family.

The victim is now out of the hospital and home with his parents and, although extremely traumatized over the incident, is expected to make a full recovery.

The suspects are all due in court Friday, but the victim’s family said Thursday they were unsure whether or not they will attend court.