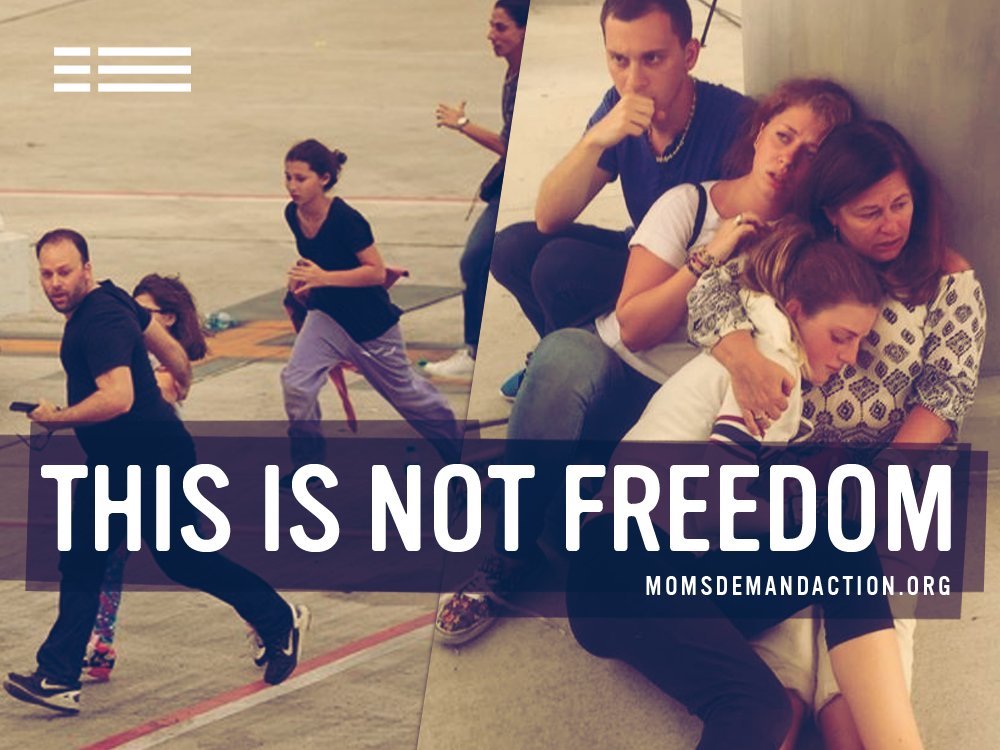 In the wake of a shooting that claimed the lives of five people inside Fort Lauderdale-Hollywood International Airport, the polarizing issue of guns raced back to the forefront of American politics.

While the attack continues to be investigated by the Federal Bureau of Investigation in cooperation with local authorities, anti-gun groups and politicians wasted no time in using the shooting to comment on gun violence.

President Obama, who has spent two terms trying to enact tougher gun legislation, told ABC News correspondent George Stephanopolous that “these kinds of tragedies have happened too often during the eight years that I’ve been president.”

Gabby Gifford’s anti-gun violence initiative Americans for Responsible Solutions pointed to the tragedy as a “painful reminder of our nation’s gun violence crisis.” The group also urged Americans not to normalize the shooting but instead realize that “our country is better than this.”

Moms Demand Action offered a stronger message aimed at shaming gun owners. The tweet, which appeared alongside pictures of Fort Lauderdale travelers huddled together, read “Being afraid of getting shot — in airports, schools, churches — isn’t freedom. We must fight for a safer America. #FortLauderdale.”

While Gifford’s and Moms Demand Action opted for a tone of urgency and policy change, Newtown Action Alliance and the Brady Campaign took a more personal approach, calling out pro-gun politicians and legislators.

“Mike Pence and Donald Trump, we need more than your thoughts and prayers. Don’t support the NRA! Support laws to #EndGunViolence instead,” the group tweeted.

The Brady Campaign followed suit but aimed its attack at Florida Senator Marco Rubio. Posting screencaps from Rubio’s Twitter comments on both the Pulse Nightclub attack in June 2016 and the Fort Lauderdale incident Friday, the Brady Campaign lambasted the Republican Senator.

While some pro-gun commentators engaged in a war of words with gun control groups, the National Rifle Association and Second Amendment Foundation have not officially commented on the shooting or any potential legislation that could come as a result.

The Florida state Senate committee is set to take up measures next week that would allow citizens to openly carry in airports, on college campuses and other public spaces. State Sen. Greg Steube, told the Huffington Post shortly after the Fort Lauderdale shooting that the attack perfectly illustrates the importance of the bill, SB 140, which he championed.

The fatal shooting unfolded just before noon on Friday. According to authorities, the shooter, an Army National Guard veteran, drew a semi-automatic handgun from his checked baggage and opened fire on travelers in the baggage claim area. Investigators refused to confirm how many shots were fired or the specific model handgun that was used. Authorities did confirm that once the gunman expended all his ammunition, he complied with local officers arriving on scene and was successfully apprehended.

The FBI was careful not to label the shooting a terrorist attack but did say they are examining every possibility.

“We’re looking at every angle, including the terrorism angle,” FBI Special Agent George Piro told reporters at a press conference outside the airport Friday evening.

The shooter voluntarily visited the FBI office in Anchorage, Alaska in November reportedly telling agents that the U.S. government was controlling his mind and making him watch ISIS videos. The FBI investigated but found no evidence that he was a danger to himself or anyone else. The FBI eventually released him into local, Alaskan police custody to undergo a mental health evaluation, Piro said.

The 26-year-old gunman is now in FBI custody and is expected to appear in court Monday to face federal charges.