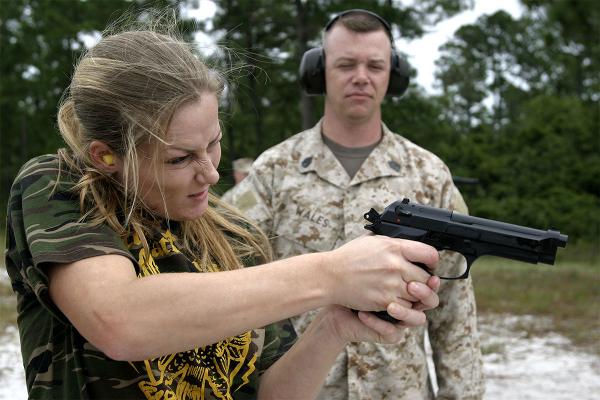 A Marine spouse shoots at a target with a M9 9mm pistol. (Photo: U.S. Marine Corps)

Announced by Rep. Blake Farenthold, R-Texas, H.R. 256 offers an exemption to military husbands and wives allowing them to purchase firearms wherever their active duty spouse is stationed even if they claim residency in another state.

Under the current law, U.S. citizens can only legally purchase handguns in the state they claim residency; however, an exemption is made for armed forces’ members. Active duty military can purchase handguns in the state they are stationed so long as they present a military I.D. and official orders showing the permanent duty station. This perk does not extend to spouses though.

Despite living with their service member, many military husbands and wives are barred from handgun purchases because their driver’s licenses are issued in their home state — the state they claim residency and pay taxes to — and not the state they currently dwell.

If passed, the bill would give military spouses the same gun rights as their service member counterparts, in turn, bolstering gun ownership within the military community.

“Our military spouses give up a great deal to support their active duty service member, often moving far from home and far from family to be with their spouse,” Farenthold said in a statement. “Military spouses should not be denied their Second Amendment rights based on the orders of the military member. They have the right to defend themselves and their families just like anyone else.”

An identical bill was introduced in 2015 by Virginia Rep. Scott Rigell in response to Islamic State group threats towards the military community. That legislation stalled after it was referred to a subcommittee.

With Donald Trump’s presidential victory stacking the deck in favor of gun rights, the bill’s second time around could prove more successful.