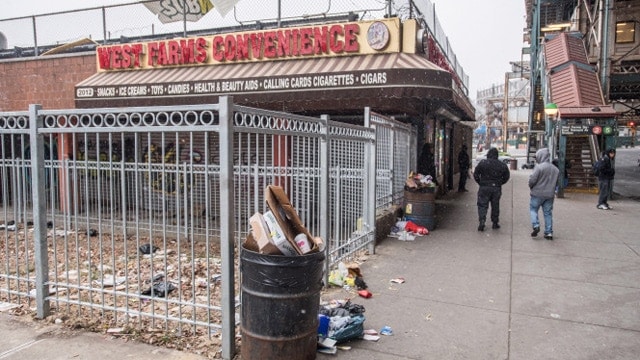 A 48-year-old mother of four who was on her way home with dinner for her family Friday was killed after she was caught in the crossfire outside of a bodega in The Bronx.

The victim was identified as Cindy Diaz. The intended target, an 18-year-old man, was also shot but he survived.

Images of the suspect were captured on nearby surveillance video. Moments before the shots were fired, the suspect is seen chasing the teen, who police say is not cooperating with the investigation.

The teen was struck in the arm, while Diaz, who was carrying a meal from McDonald’s for her kids, was hit multiple times in the torso and arm. Diaz was taken to the hospital but efforts to save her failed and she was pronounced dead a short time later.

Local residents say the place where Diaz was shot is a hotspot for criminal activity.

Wendy Cedno, a local bus driver, said she feels unsafe in the area because people frequently hang out in large groups and are oftentimes arguing. Cedno said she fears her son will get shot while going to the store.

Resident Janelle Robinson said the area cleans up when police are present, but expressed frustration that they are only around after someone gets shot.

“The police know how bad the neighborhood is and what goes on near the store,” Robinson said, “When the police aren’t here people go on with their criminal activities.”

Likewise, a bodega employee who did not want to be identified said after Sgt. Paul Tuozzolo was killed in November, a Mobile Command Center was set up in the area and things improved. But the employee said now that the cops are gone, the criminal activity is back.