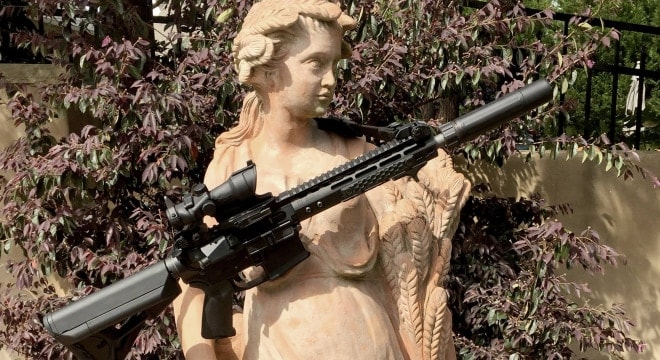 A new attempt to carve suppressors out of NFA regulation debuted in the U.S. House this week. (Photo: Dead Air Silencers)

House Republicans on Monday introduced legislation to remove suppressors and silencers from National Firearms Act regulation and treat them as regular firearms.

The Duncan-Carter Hearing Protection Act was delivered by GOP sponsors U.S. Rep. Jeff Duncan of South Carolina and Rep. John Carter of Texas and aims to deregulate suppressors as a safety measure to help promote their use in protecting hearing.

“I’ve been shooting since I was a young child – beginning with plinking with a .22 rifle and dove hunting with my Dad,” said Duncan in a statement, acknowledging his hearing has been damaged because of gun noise over the years. “Had I had access to a suppressor, it may have protected me, as well as millions of other Americans, from this sort of hearing loss.”

Duncan pointed to Europe, where suppressors are sold in many countries over the counter without the same level of regulation as in the U.S.

“It just doesn’t make any sense to regulate suppressors the way we do presently,” he said. “I think it certainly is questionable from a constitutional standpoint. It’s striking that even Britain, which has some of the strictest gun laws in the world, has no restrictions on suppressors.”

Since 1934, the federal government has treated devices designed to muffle or suppress the report of firearms as Title II devices that required registration under the National Firearms Registration and Transfer Record and mandated transfers that included a $200 tax stamp. The Duncan-Carter bill would repeal this requirement and treat suppressors as firearms– which would allow them to be transferred through any regular federal firearms license holders to anyone not prohibited from possessing them after the buyer passes an FBI instant background check.

The proposal includes a provision to refund the $200 transfer tax to applicants who purchased a suppressor after Oct. 22, 2015.

A similar bill, introduced in 2015 by Arizona Republican Matt Salmon, gained 82 co-sponsors on both sides of the aisle but never made it out of committee despite being one of the most-viewed bills on Congress.gov last year. Salmon retired at the end of his term.

Now, with the White House under new management, advocates for the measure feel the deregulation move has a fresh chance.

“Although we recognize that introducing this bill is the first step in what will be a lengthy process to change federal law, we look forward to working on the Duncan-Carter bill, alongside the Congressional Sportsmen’s Foundation, the National Rifle Association, and the National Shooting Sports Foundation to advance and ultimately enact this common-sense legislation,” said Knox Williams, president and executive director of the American Suppressor Association, who noted “citizens should not have to pay a tax to protect their hearing while exercising their Second Amendment rights.”

The bill is awaiting committee assignment.