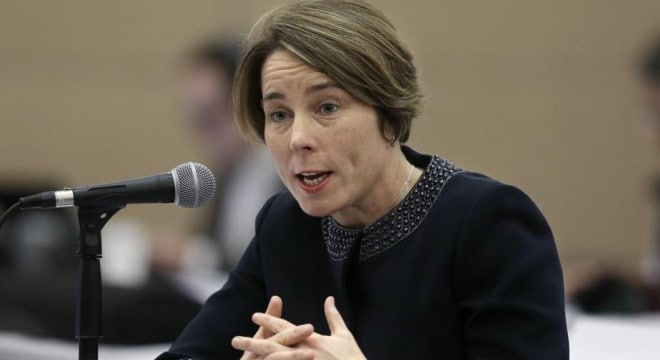 Massachusetts Attorney General Maura Healey has come to an agreement with a gun shop over the sale of handguns without the Commonwealth’s list of mandated safety features. (Photo: AP)

State Attorney General Maura Healey’s office and a Worcester gun dealer have settled a case that involved selling handguns that were not Massachusetts-compliant.

The Gun Parlor has agreed to end sales of handguns that do not meet state-mandated safety regulations, specifically load indicators and magazine safety disconnects, and pay $10,000 in fees and costs associated with an investigation into the store while $25,000 in fines will remain outstanding and will be waived if the shop remains in compliance for two years.

“In Massachusetts, we rely on gun dealers to help ensure responsible gun ownership and use by following the law,” Healey said in a statement Monday. “Today’s agreement requires this Worcester gun dealer to come into compliance with our firearm safety laws and regulations, and do its part to prevent access to unsafe and illegal weapons in our communities.”

The Gun Parlor was investigated by Healy’s office, who found numerous violations of state law including failing to verify the guns sold to law enforcement and military were being used for official duties and did not provide required safety warnings to customers who bought short-barreled handguns. However, the primary focus of Healey’s investigation was into the Glocks sold by the store.

As noted by the Worcester Telegram, over a one-year period beginning in July 2014, the Gun Parlor sold nine Glocks that did not meet the Commonwealth’s handgun safety regulations. Further, between 2013 and 2015 the store sold four guns not on the approved roster.

The Gun Parlor is notable for being the first shooting range in Worcester since 2008, though it met opposition from some community activists when the business opened.

While the store has not issued a comment, a crowdfunding campaign has been launched seeking to raise the $10,000 fee agreed to by the gun dealer.

Healey, who was given a green light last October by a county court to investigate Glock over customer complaints of accidental discharges, is currently involved in a federal lawsuit with the firearm industry’s leading trade association and four gun stores over her interpretation of what constitutes an “assault weapon” under state law.