NATO: Got some trees? You can stop a tank (VIDEO)

U.S. and Canadian combat engineers deployed to Lithuania recently pointed out that an ancient field obstacle invented by the Romans is still pretty good at stopping tanks today.

Members of the U.S. Army’s 54th Brigade Engineer Battalion and Canadian engineers from 1 Combat Engineer Regiment (1 CER), acting as part of a “blue force” during a recent exercise, helped stop a “red force” armored assault through the use of an abatis.

Also spelled abattis, or abbattis, the basic concept is a defensive obstacle formed by felled trees laced together. And it doesn’t take a lot of gear to pull off: chainsaws or a few rucks full of explosives.

While it sounds simple, if done right such as in the above video, it can block a road pretty solid. 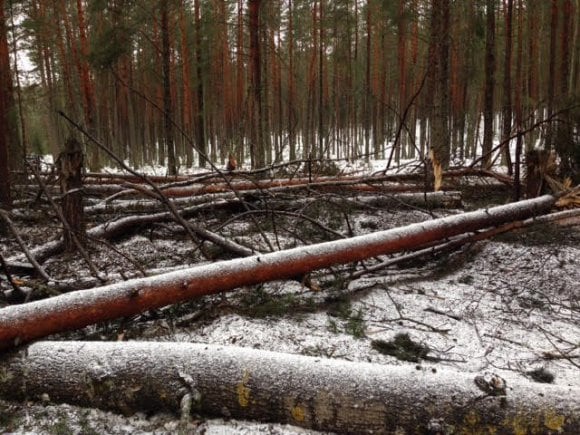 Looks easy to clear, unless you are under sniper fire. (Photo: 1st Lt. Sarah Melville/U.S. Army)

Besides the abatis, the engineers coughed up other party favors such as “log hurdles, concertina wire, craters, anti-vehicle ditches, and trenches” to help slow the red force’s vehicles down when approaching the defended town.

And it worked out pretty well.

According to the Army:

As a result of the obstacles and corresponding fires and forces on over watch, not a single vehicle made it into the village; soldiers were forced to dismount and enter from the western wood line, where they encountered an unobservable wire obstacle within a ditch, leaving them fully exposed when they attempted to breach it.

Fully exposed is not a good thing on a battlefield.

“If the vehicles had all gone into the city, the ‘Blue Force’ did not have enough anti-tank weapons to kill them. In the end it was a stalemate, they couldn’t get in,” said Sgt. Doyle, a Canadian 1 CER Section Leader. “So, our obstacles made a world of difference, force multiplier bar none.”