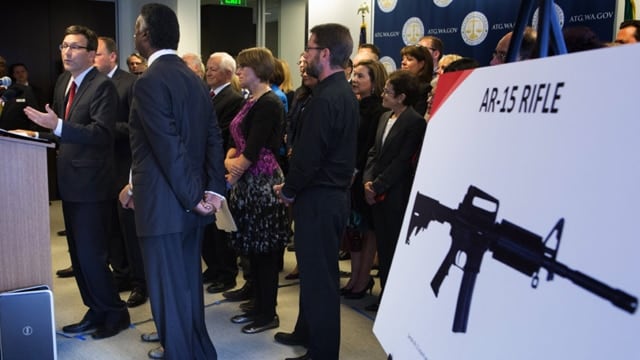 The attorney general in Washington state is pushing a pair of bills that would limit, or outright ban, the sale of so-called assault weapons.

The first bill aims to ban the sale of both the weapons, and high-capacity magazines. Those who already own such guns would be grandfathered in. Hedging his bet, Attorney General Bob Ferguson proposed a second bill that would expand background checks in Washington for so-called assault weapons and high-capacity magazines. It would also create a license for the purchase of such weapons, and put an age restriction on sales: 21 and up.

“I am working hard to advance my proposal to ban assault weapons in the legislature, and that effort will continue,” Ferguson wrote in a news release. “In the meantime, I hope we can pass enhanced background checks in this legislative session with strong bipartisan support.”

Ferguson cited a 2012 Johns Hopkins study which estimated the prevention of 100 homicides and 500 shooting injuries if a national ban on high-capacity magazines were implemented.

“This past year, we all watched in horror as the mass shootings in Orlando and Dallas took place,” said Rep. Strom Peterson, one of the sponsors of the bills. “And then it happened here, in Mukilteo. It’s past the time we stand up for our communities and keep these assault weapons from destroying more families.”

The incident in Mukilteo, Washington saw a gunman shoot and kill three people and injure one more at a house party in July of last year. The suspected shooter, 19-year-old Allen Christopher Ivanov, legally bought an AR-15 a week before the shooting, according to the Seattle Times.

Will Kramer is the 18-year-old who was shot, but survived the shooting in Mukilteo. His father, Paul Kramer, says he hopes Ferguson’s efforts will help reduce the potential for mass shootings in Washington.

“If our current political leadership doesn’t have the will to pass a ban on the sale of assault weapons, I would support the assault weapons enhanced background check bill as an incremental step towards increasing public safety and reducing gun violence,” said Kramer, according to KCPQ.

The expanded background checks and licensing bill would require people to renew the license annually. It would also implement a 10-day waiting period.

“I don’t expect either (bill) to pass, barring some convenient incident that draws attention to the issue,” said Joe Waldron, Chairman of the Gun Owners Action League of Washington, in an email to Guns.com.

“These bills have nothing to do with crime control or public safety. They’re all just part of an incremental program to eventually ban the private possession of ALL firearms,” said Waldron. “Handgun Control founder Pete Shields said that in 1978, and that has been their plan ever since.  Just one little restriction or prohibition at a time — the classic frog in the pot of boiling water.”