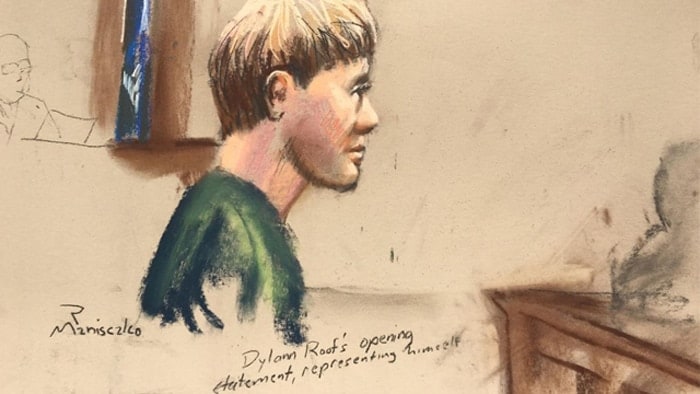 Dylann Roof, who has received the death penalty for the hate-fueled killings of nine black churchgoers, makes his opening statement at his trial in this courtroom sketch in Charleston on Jan. 4. (Photo: Reuters/Sketch by Robert Maniscalco)

A federal jury sentenced convicted South Carolina church shooter and white supremacist Dylann Roof to death Tuesday, less than a month after convicting him of all 33 counts against him.

The 22-year-old Roof has shown no remorse in the 19 months since the June 2015 massacre at a Bible study in the basement of Emanuel African Methodist Episcopal Church, which left nine black parishioners dead — each of them shot at least five times. The convicted killer represented himself for the sentencing phase of his federal trial, and again showed no remorse just hours before jurors handed down the sentence.

“In my (FBI confession) tape I told them I had to. But it’s not true: I didn’t have to. No one made me. What I meant was: I felt like I had to do it. I still feel like I have to do it,” Roof told jurors Tuesday in a five minute closing statement, according to NBC News.

“From what I’ve been told, I have a right to ask to give me a life sentence. But I’m not sure what good that would do anyway,” Roof said, before reminding the jury that just one of them could refuse a death sentence and spare his life, a comment that drew quiet gasps from those in the room.

“That’s all,” said Roof, abruptly ending his remarks. Judge Richard Gergel then instructed the jury on how to proceed.

Ten women and two men — nine of them white, three of them black — sat on the jury. In December, they deliberated for about two hours before finding Roof guilty of all 33 charges, including hate crimes and obstructing the exercise of religion. On Tuesday, they took about three hours before coming to a unanimous decision, recommending the death penalty for all 18 counts that carried a possible death sentence.

Jurors didn’t look at Roof as they came back into the courtroom with the verdict, according to CNN, and Roof did not appear to have any reaction as the verdict was read.

“No verdict can bring back the nine we lost that day at Mother Emanuel,” said Attorney General Loretta Lynch in a statement. “And no verdict can heal the wounds of the five church members who survived the attack or the souls of those who lost loved ones to Roof’s callous hand. But we hope that the completion of the prosecution provides the people of Charleston – and the people of our nation – with a measure of closure.”

The massacre sparked calls for stricter gun control measures in South Carolina, specifically the closure of the so-called “Charleston Loophole.” In the weeks after the shooting, the FBI admitted there was a breakdown in the federal background check system, allowing Roof to buy a .45-caliber Glock — the weapon used in the shooting.

Under federal law, the FBI has three business days to tell a gun dealer whether a customer is a prohibited purchaser. If the feds don’t deny the purchase in that three day window, the sale can happen on the fourth day, unless local laws are in place to stop it. Roof took advantage of this, and according to Time magazine, 60,000 guns have been sold to buyers under similar circumstances since 1998.

“To be clear, this is not about taking away people’s guns,” said South Carolina State Sen. Marlon Kimpson, the man sponsoring a bill that would expand that waiting period from three days to 28. “This is about making sure that people who are unfit to have guns are properly screened with enough time from the federal government to make that decision and get the decision back to the gun dealer.”

“The only people that should fear an expanded background check bill and law should be people who are unfit to carry guns,” said Kimpson last week, according to WSPA. Kimpson pre-filed another version of his bill for the state legislature’s new session.

As for Roof, only three federal inmates have been executed by the Justice Department in the modern death penalty era. Oklahoma City bomber Timothy McVeigh was one of them. Boston Marathon bomber Dzhokhar Tsarnaev is appealing his 2015 federal death penalty sentence.