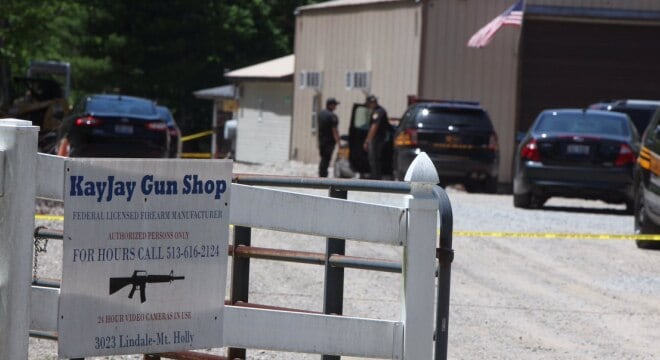 The KayJay Gun Shop in Mount Holly, Ohio was the scene of a fatal shooting last summer that has been ruled a negligent homicide. (Photo: Cameron Knight/Cincinnati Enquirer)

A firearm instructor who pleaded guilty to negligent homicide was given a short prison term this week and ordered to do community service after one of his students accidentally killed a shooting range owner during a class he was teaching.

Montgomery and his daughter, who was helping him teach a concealed carry class at the KayJay Gun Shop in Mount Holly, were initially charged after the fatal shooting of range owner James Baker last June. Baker, 64, was killed by a bullet that hit him in the neck after being fired through a wall by an unidentified student in the class.

The student, according to reports, was practicing weapon malfunction drills with what was supposed to be inert ammunition but a live round somehow found its way into the gun.

Montgomery was at first charged with reckless homicide and his daughter with negligent homicide though charges against her were later dropped.

In addition to his jail term, Montgomery was ordered to perform 120 hours of community service, no longer conduct CCW classes, donate $250 to the YMCA and complete five years’ probation.

“So many things happened that shouldn’t have happened in this case, Mr. Montgomery,” Haddad said. “There has to be something from this that everyone takes to make sure that it doesn’t happen to someone else.”

As advocated by the National Shooting Sports Foundation, the “most basic safety rule” of safe gun handling is to always keep the muzzle of the firearm pointed in a safe direction.