The future for a crate of rifled muskets that have spent the past 150 years underwater is starting to look bright after years of conservation work.

The archaeology department at Memorial University in St. John’s Newfoundland has been working since 2011 to save a crate of 20 Pattern 1853 Enfield rifled muskets that were delivered to Canada via fishing trawler after an extended period on the bottom of the Atlantic. 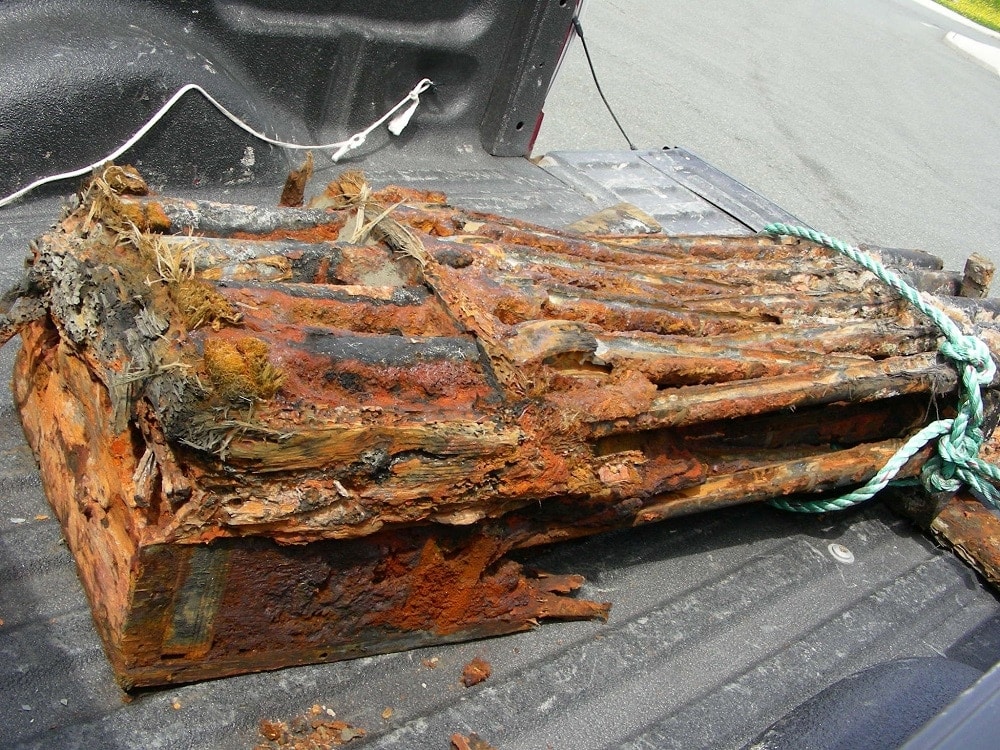 When the Enfields first came to the surface in 2012, they were one solid mass. (Photo: Newfoundland Provincial Archaeologist’s office)

The rifles were brought to the surface by the Newfoundland Lynx, a 222-foot stern trawler operating on the famous Grand Banks fishing grounds. Once the sea life-encrusted crate was brought ashore, they reached out to local authorities.

“When Ocean Choice International dredged up these guns just inside the 200-mile limit, they contacted us,” Martha Drake, Newfoundland’s Provincial Archaeologist, told Guns.com.

Originally taken to The Rooms Provincial Museum in St. Johns, Drake realized that the task of saving the guns, exposed to the air for the first time in over a century, exceeded their capacity.

“It’s a really complicated project between the wood of the box, and the components of the rifles themselves,” said Drake, explaining that to stabilize the rifles would take years of treatment in a special tank. That’s when Memorial University of Newfoundland was brought in.

Dr. Barry Gaulton, who heads up the archaeology department at MUN, told Guns.com the Enfields were not your typical project.

“The crate of rifles found when fishermen working off Newfoundland’s Grand Banks hauled up the unusual catch. The heavily-concreted and silt-filled crate of rifles was about 5 feet long and weighed approximately 600 pounds,” said Gaulton. 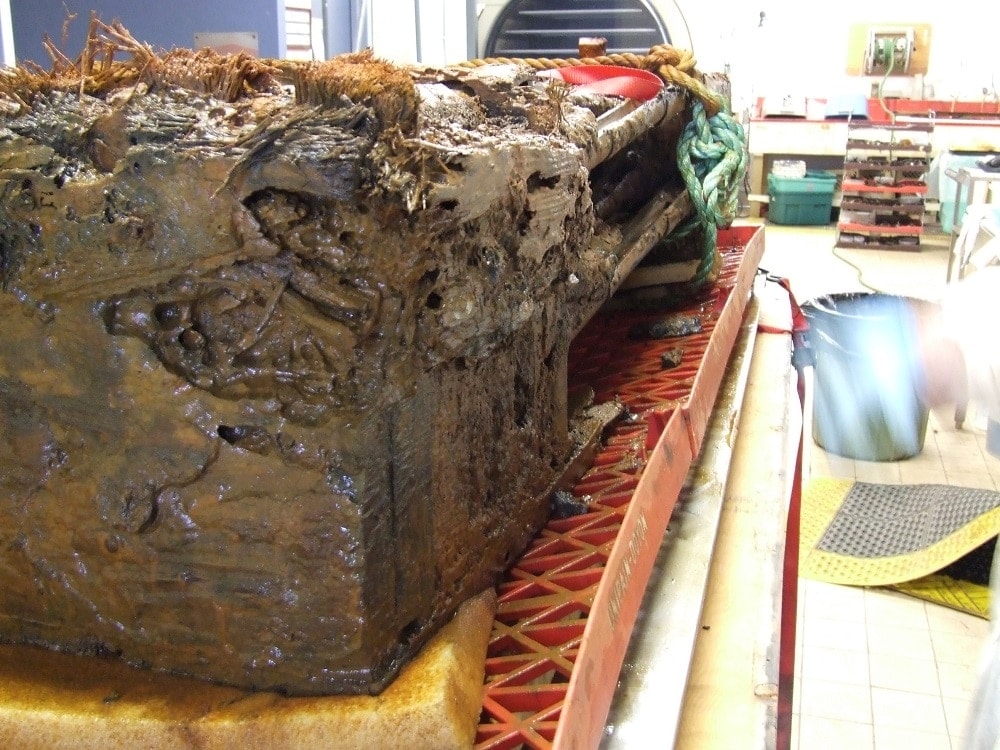 The rifles, still in the crate they have been in since around the 1850s-60s, are housed in a large container filled with a chemical solution that includes a bulking agent and corrosion inhibitor designed to stabilize the relics.

Periodically, the guns are raised and lowered back into the solution using a chain and hoist a few times a year. 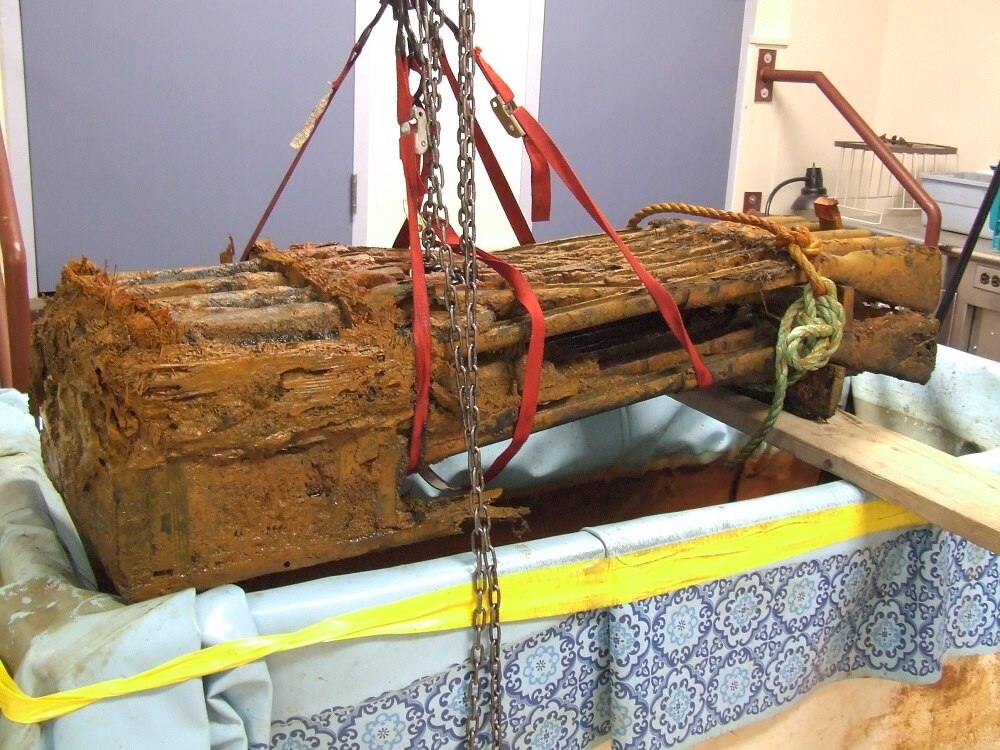 “The ongoing conservation has revealed a remarkably intact case of P53s,” said Gaulton.

The Enfield P53 was the standard longarm of the British Army for two decades, seeing service in the Crimean War, the New Zealand Land Wars, and the Sepoy Munities. It remaining in service with the Queen’s allies into the late 19th Century.

Firing a .577-caliber ball or bullet from a 29-inch long .58-caliber barrel, it could make aimed shots out to 500-yards in the hands of a skilled marksman. The barrel was held to the wooden stock by three metal bands, which has led to the rifle being referred to as the “3-band Enfield.” 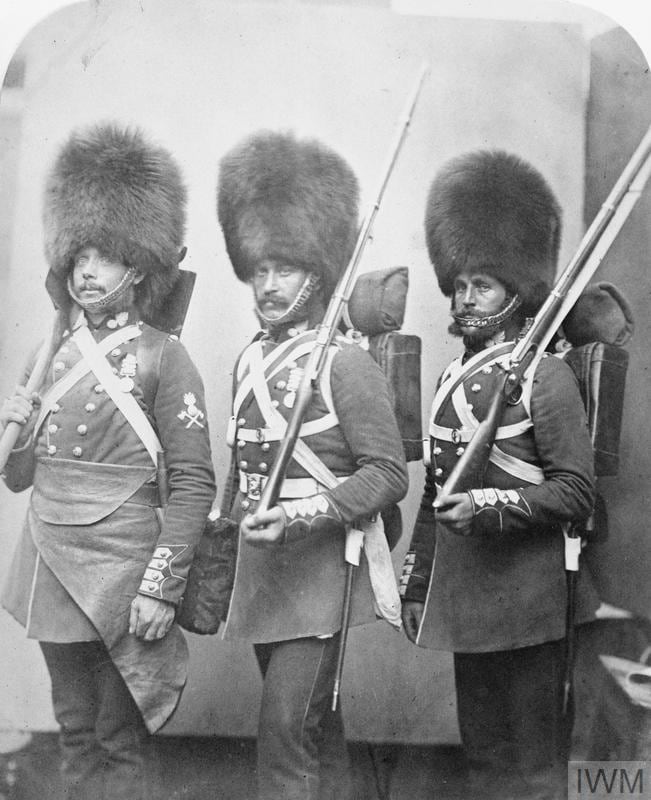 P53 Enfields were so popular, in fact, that both the Union and Confederate Army carried them to one extent or another during the Civil War. 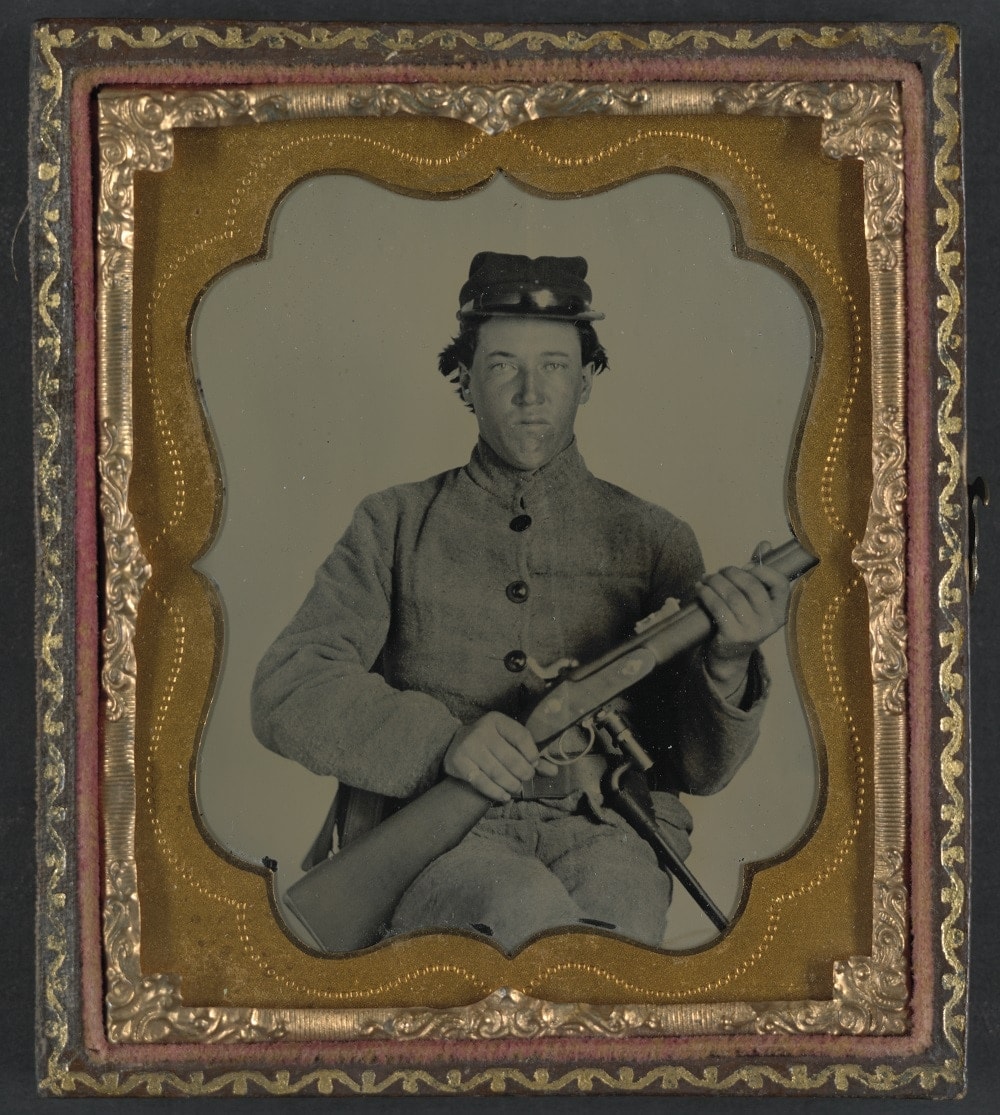 A similar crate of 20 Enfields was pulled up off Georgia in the 1980s by an archaeological diver and has been tied to the Confederate blockade-runner CSS Stono. Those rifles have been undergoing conservation since then and are at Sweetwater Creek State Park.

However, spending decades under the sea has taken a toll on the Newfoundland crate.

“The seawater has unfortunately eaten away the iron barrels and lock plates but all the brass furniture is in a remarkable state of preservation, as are the wooden stocks,” explained Gaulton. 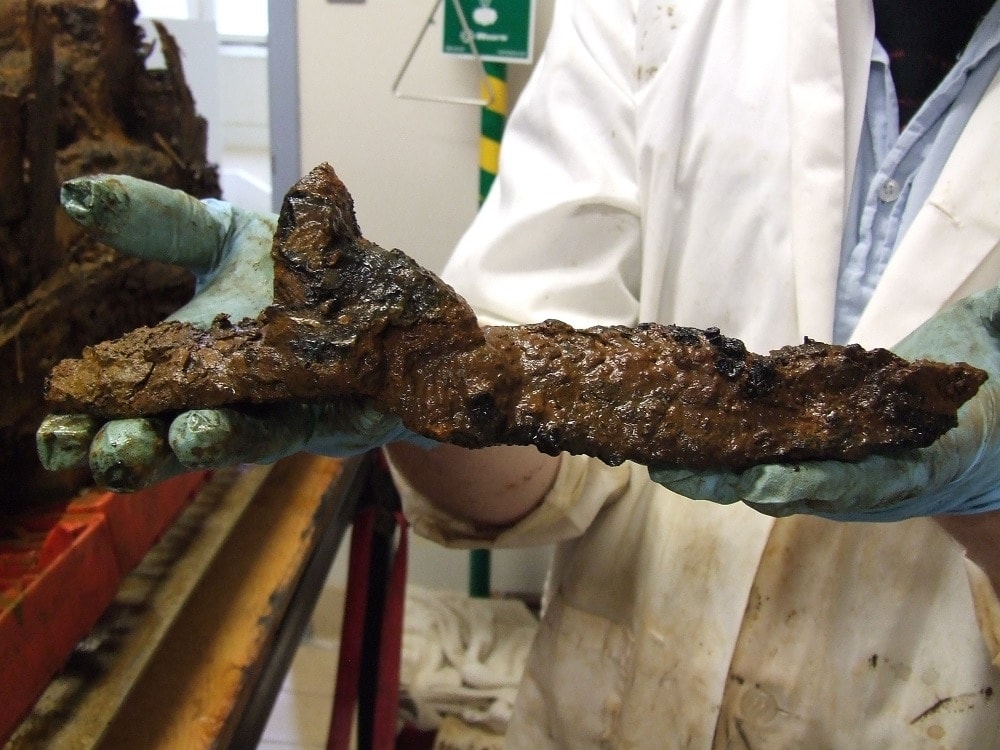 One of the Enfields, note the barrel and lockplate are gone (Photo: MUN)

Now the riddle of exactly when the guns were made, and for whom they were intended– be it Civil War-era American forces or British troops in Canada– could be solved by inspectors’ marks seen for the first time since they left England as over 300 pounds of silt has been removed through the soaking process. 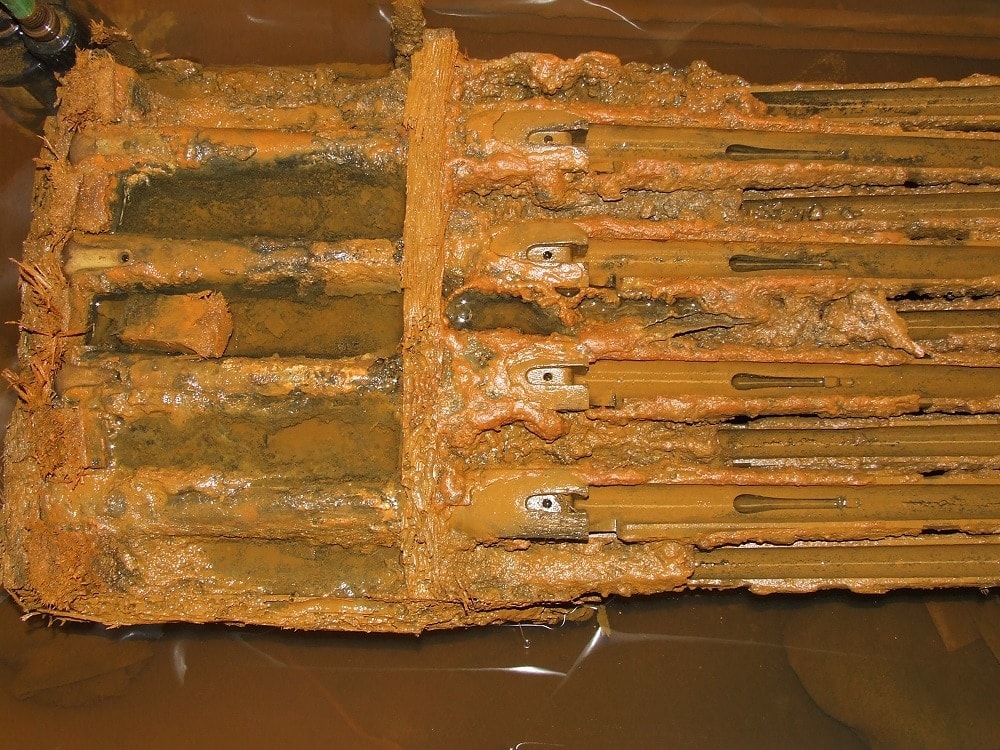 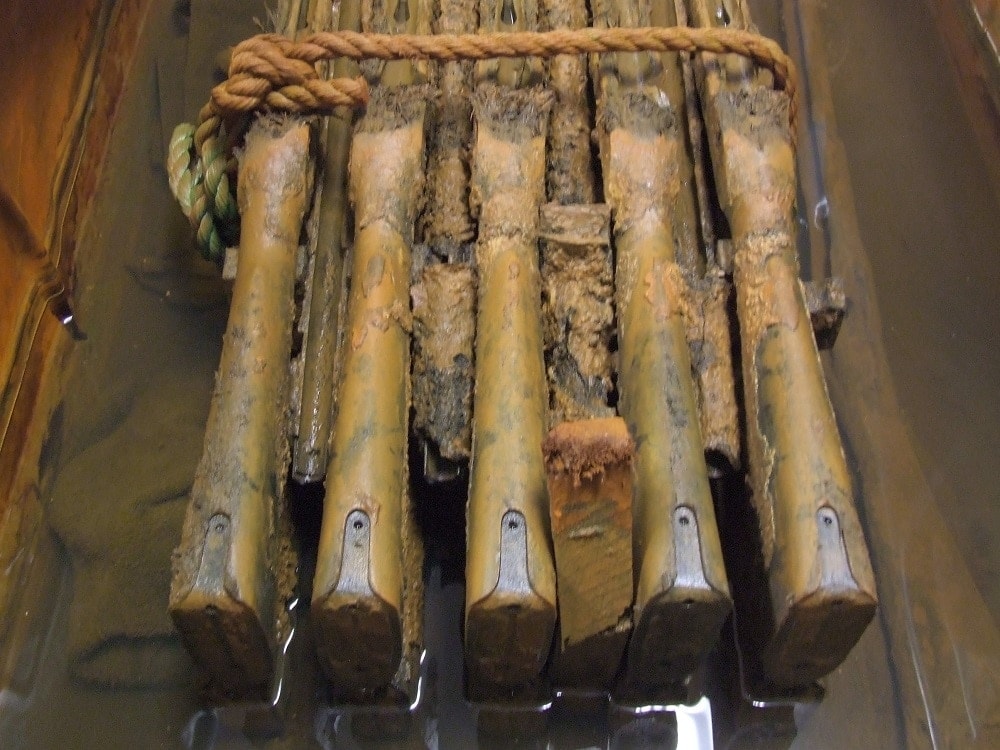 …uncovering some of the secrets below (Photo: MUN) 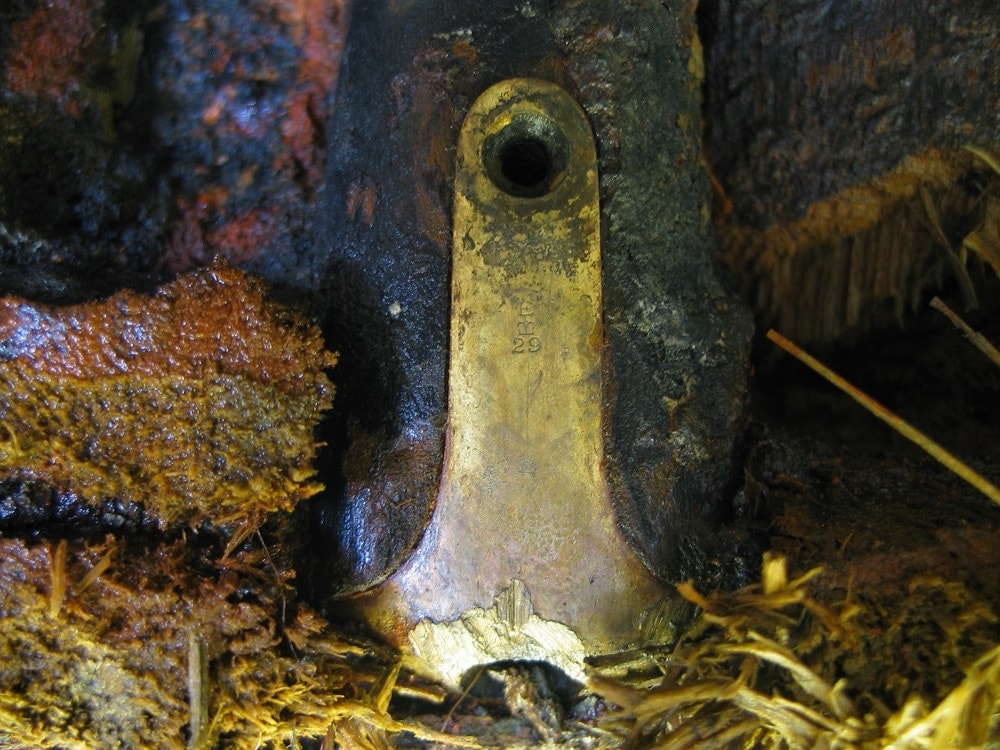 Inspector’s marks are being documented on the brass buttplates (Photo: MUN) 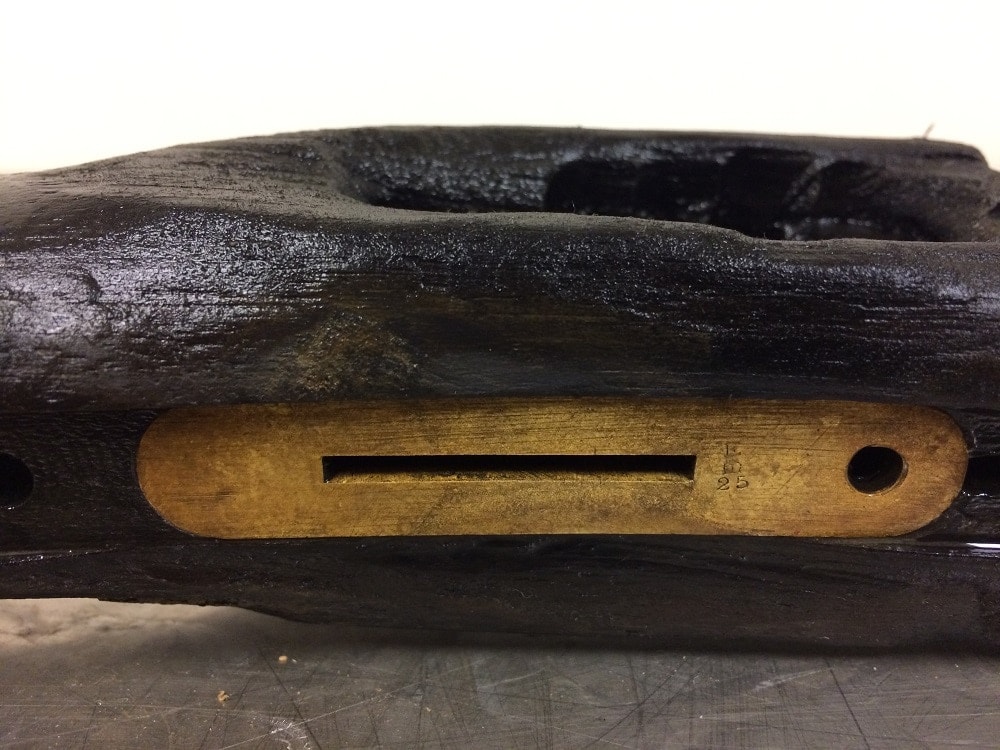 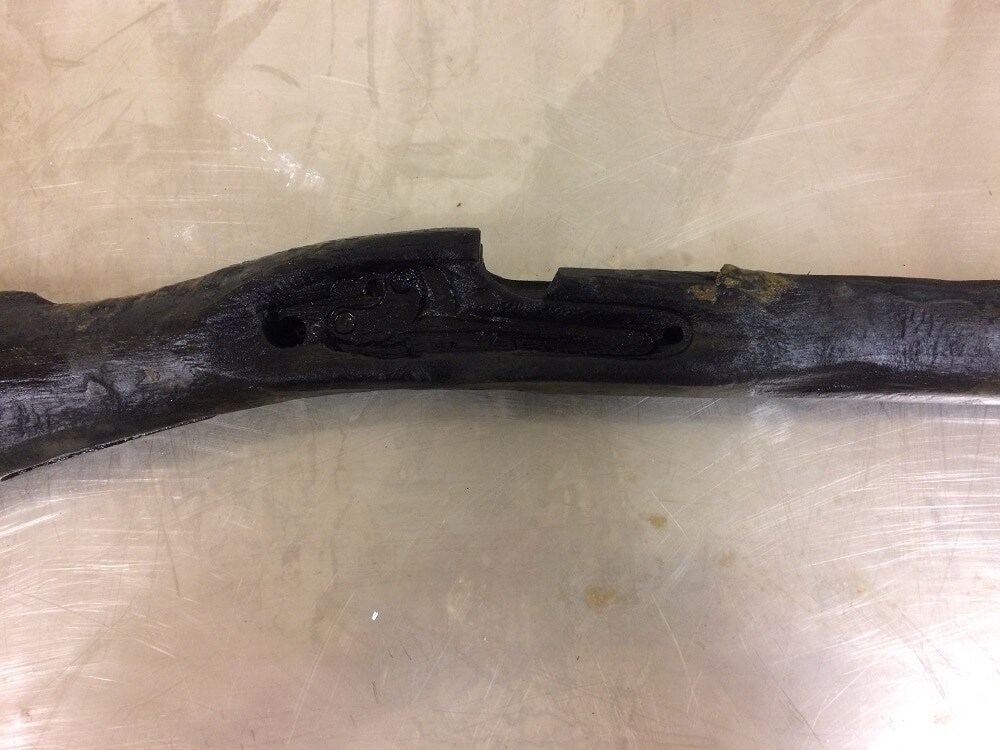 Teasdale says she has also found evidence that the crate may have been lined with lead or a lead alloy and she hopes to stabilize the crate of Enfields intact, without having to separate each rifle, but the process still has a while to go.

“This soaking process will take many years and is done to prevent the wood from collapsing, cracking, or warping once dry and also to prevent any remaining iron from staining the wood surface,” she said.

And we will check back to see just what they find.