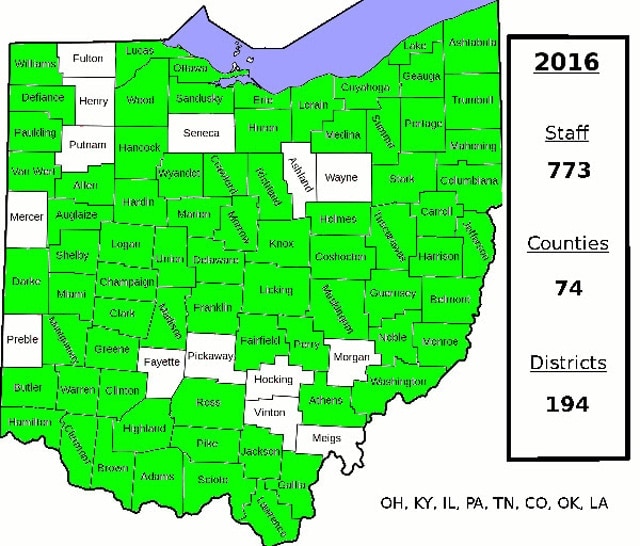 Seventy-four of Ohio’s 88 counties have teachers and other school staff who have completed the training. (Graphic: FASTER)

FASTER Saves Lives, a program aimed at training teachers and other school staff to respond to active shooter scenarios, has trained 773 teachers and staff members since 2013, the organization announced Wednesday.

The trainees come from eight states, across 194 different school districts, including 74 of the 88 counties in Ohio, where the program is based, according to a press release.

Historically, the typical protocol when dealing with an active shooter situation at a school has been to shelter in place and wait for the arrival of law enforcement officers. However, in recent years that protocol has changed in some districts and what was once considered by some to be a radical idea – training school staff to deal with such scenarios – has evolved into a more acceptable practice for some.

“In 2016, we saw unprecedented support not only from school districts but also from county sheriffs across Ohio,” said Joe Eaton, the program director.

“As one example, a sheriff worked to get the last four districts in his county authorized and trained,” Eaton added. “We used the sheriff’s range and the school buildings to conduct the classes. It was truly awesome seeing the entire community come together to put school safety first!”

FASTER, which stands for Faculty / Administrator Safety Training & Emergency Response, notes that the purpose of the training program is not to replace police and other first responders. Rather it provides the tools and knowledge to school staff so they may stop a threat and provide immediate medical aid in the valuable minutes while waiting for first responders to arrive.

The training is made up of 26 hours of hands-on training through a carefully structured curriculum that exceeds the requirements of the Ohio Peace Officer Training Academy. The training is provided at no cost to participants and strictly runs on donations.

Eaton said they expect to see even participation in 2017. In fact, he said they will host their first FASTER Saves Lives for businesses, churches, and the public as a fundraiser for Buckeye Firearms Foundation, which has so far provided more than $500,000 to the program.