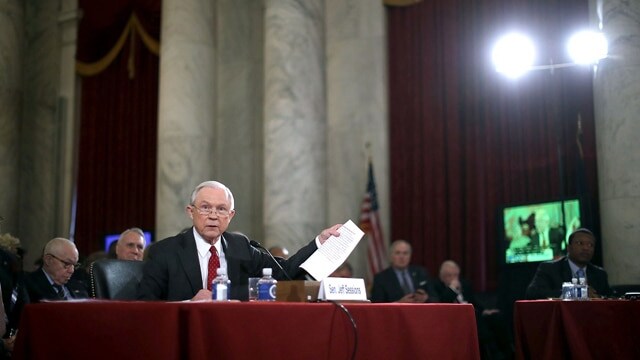 President-elect Donald Trump’s pick for attorney general, Alabama Sen. Jeff Sessions, had plenty to say about guns in his two day confirmation hearing, which was marred by protests and renewed allegations of racism.

In his opening remarks on the first day of his hearing, Sessions outlined his vision for the office, and talked about how he would handle gun crime.

“If I am confirmed, we will systematically prosecute criminals who use guns in committing crimes,” said Sessions. “As United States Attorney, my office was a national leader in gun prosecutions nearly every year. We will partner with state and local law enforcement to take down these major drug trafficking cartels and dismantle criminal gangs.”

When asked about universal background checks Tuesday, Sessions said he thinks that would be an overreach.

“I believe in background check laws and many of them are appropriate, but in every instance? There are some instances when it’s not practical, like say for example somebody inherited a gun from their grandfather. Those transactions I’m not sure should require that kind of universal background check,” he said.

Sessions is a longtime supporter of gun rights, earning an A+ rating from the NRA. On Tuesday, the National Shooting Sports Foundation joined the NRA in supporting Sessions, saying he’s worked tirelessly to protect the rights of law-abiding citizens.

“We are confident that with Sen. Sessions as the top law enforcement officer in the nation that our public will be safer, that criminals will be taken off the streets, that justice will be served, law enforcement priorities will take precedence over politics and the Second Amendment rights of law-abiding Americans will be respected,” said Lawrence Keane, NSSF senior vice president and general counsel in a statement released Tuesday.

Still, it wasn’t the smoothest hearing for Sessions, who underwent a similar confirmation hearing for a federal judgeship in 1986. The Senate Judiciary Committee in that instance, which was also Republican-controlled, narrowly rejected Sessions’ bid amid allegations of racism.

On Tuesday, Sessions was repeatedly interrupted by protestors that sought to remind committee members and the general public of those 30-year-old allegations. One of two protestors in KKK robes shouted at Sessions at one point, before they were removed. “Wait a minute — you can’t arrest me, I’m white!” shouted the protestor. “White people don’t get arrested.” Other protestors interrupted the hearing by shouting “NO TRUMP, NO KKK, NO FASCIST USA!”

“The next attorney general must bring hope and healing to this country, and this demands a more courageous empathy than Sen. Sessions’ record demonstrates,” said New Jersey Sen. Cory Booker Wednesday at Sessions’ hearing, marking the first time a sitting U.S. senator testified against a colleague in a Cabinet-level confirmation hearing.

Booker was joined by Civil rights icon and fellow Democrat, Rep. John Lewis, in opposing Sessions. “We need someone who is going to stand up, speak up and speak out for the people who need help, for the people who have been discriminated against,” said Lewis, according to NBC News.

Just before Lewis spoke Wednesday, Trump transition team members circulated photos of Lewis and Sessions holding hands in March 2015 at the 50th anniversary of “Bloody Sunday” on the Edmund Pettus Bridge, where civil rights marchers, including Lewis, clashed with police in 1965.

Sessions called allegations of racism “damnably false” Tuesday, saying, “I abhor the Klan and what it represents and its hateful ideology.”

If the Republican-controlled Judiciary Committee signs off on Sessions, his nomination will move to the full Senate for a simple majority vote, according to ABC News. Republicans hold 52 seats in the Senate, including Sessions, who could vote for himself.