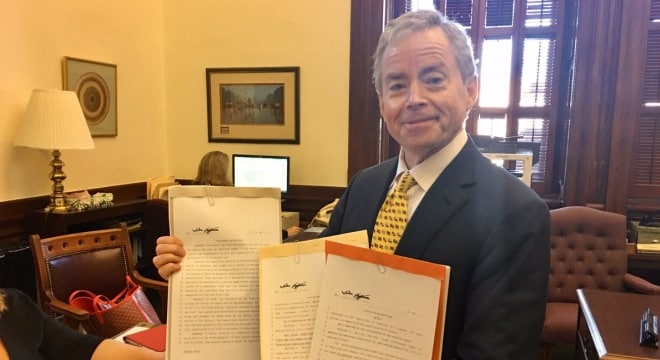 Huffines filed a series of gun rights bills this week in the Texas Senate. (Photo: Twitter)

“Second Amendment liberty is critical for the preservation of all of our other liberties,” said Huffines in a statement. “Wherever state government interferes with that right, or unduly burdens it, it is my duty as a state legislator to fix it.”

First on the list of proposals is an amendment to the state constitution, SJR 30, which would prohibit Texas from ever establishing a gun registry. The move — if approved by state voters — could only be removed by a further ballot referendum, thus keeping lawmakers in Austin from being able to pass future gun registration schemes.

“It is critically important to make our constitution crystal clear on the subject so there’s no sneak attack or backdoor, dark of the night attempt to create a gun registry,” said Huffines.

Next, SB 458 would clarify that a concealed carry license holder can only be charged with illegal possession of a firearm when intoxicated if they actually have a gun on their person. Huffines contends under current law, LTC holders are being hit with the charge at traffic stops even when their gun is locked in their car’s trunk or out of reach. Further, some are only charged because the threshold for intoxication under current law is much lower for those carrying a firearm than for drunk driving.

Huffines’ SB 459 prohibits local politicians from taxing guns and ammo or regulating their sale or manufacturing without explicit state authority. He argues strengthening the state’s preemption laws in such a manner will keep “a handful of liberal politicians in city halls and county courthouses” from moving to enact new taxes on guns at the local level.

Finally, SCR 8 would enshrine the cannon as the state’s official gun. The resolution’s language gives a tip of the hat to artillery pieces key to Texas’ history including the famous “Come and Take It” cannon at Gonzales, the bronze cannon from the Alamo, several guns on the ground of the state Capitol, and Smokey — the ceremonial cannon used by theUniversity of Texas since 1954.

The bills have been received by the secretary of the Senate and are awaiting committee assignment.

Correction: This article has been corrected to show that Smokey is used, of course, by the University of Texas, not Texas A&M