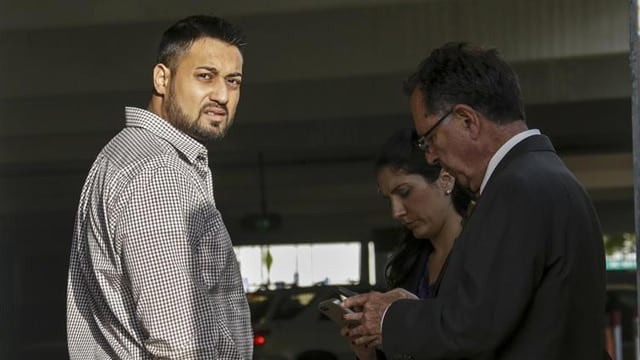 The brother of the gunmen who opened fire at a holiday party in San Bernardino in 2015 pleaded guilty to immigration fraud at his appearance in federal court Tuesday.

Syed Raheel Farook, 31, of Corona, California, admitted to arranging a fraudulent marriage between a U.S. citizen and a Russian immigrant. He now faces up to five years in federal prison, a $250,000 fine, and three years of supervised release. His sentencing is scheduled for November.

Federal authorities uncovered the fraud case during their investigation into the shooting carried out by Farook’s brother and his wife on Dec. 2, 2015, that left 14 people dead and 22 wounded. The couple were later killed during an exchange of gunfire with police.

Authorities said they have pledged to uncover and prosecute all criminal activity related to the attack. “As I have said many times, we are committed to leaving no stone unturned in this investigation,” said U.S. Attorney Eileen M. Decker.

According to the indictment filed in April, Farook conspired with his wife, Tatiana Farook, and her sister, Mariyah Chernykh, to obtain immigration benefits for Chernykh, who is a Russian citizen, through a fraudulent marriage to Enrique Marquez Jr., a U.S. citizen and close friend of the Farook family.

They have all been accused of providing false statements in immigration documents for Chernykh from late 2014 through February 2016. Tatiana Farook and Chernykh will stand trial in March.

Marquez has also been charged with illegally supplying two firearms to the shooters — Syed Rizwan Farook and his wife Tashfin Malik — who used the weapons to carry out the attack. The attack re-charged debate on gun laws and terrorism in the U.S.

Although Marquez was not directly involved in the shooting, he allegedly plotted with Syed Rizwan Farook to carry out similar attacks in the Inland Empire years earlier. Marquez will go on trial in September.