DOJ, Baltimore police agree on reforms ahead of Trump presidency 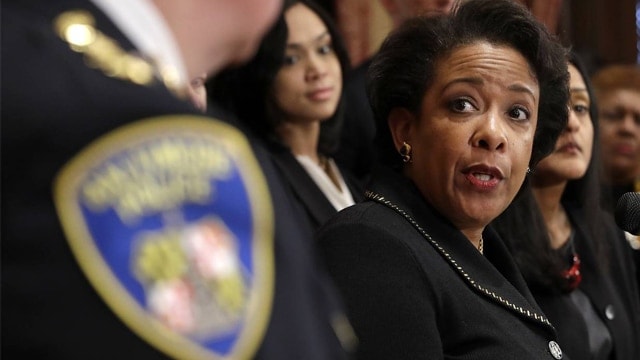 Officials from the Justice Department and the city of Baltimore announced an agreement Thursday which, pending approval from a federal judge, would have far-reaching implications for how police officers operate in Baltimore in the coming years.

The consent decree signed by federal and city officials would implement several reforms aimed at correcting a litany of abuses outlined in August by the DOJ’s Civil Rights Division. A 163-page report detailed the ways in which the Baltimore Police Department “engages in a pattern and practice of conduct that violates the First, Fourth and 14th Amendments of the Constitution as well as federal anti-discrimination laws.”

The DOJ launched the investigation after 25-year-old Freddie Gray, a black man, died from injuries sustained while in BPD custody in April 2015, sparking riots in the city and nationwide outrage. Thursday’s agreement comes after weeks of around-the-clock negotiations aimed at finalizing the decree, with both the DOJ and BPD fearing the efforts would fail if left up to President-elect Donald Trump and his incoming team.

Both Trump and his nominee for attorney general, Alabama Sen. Jeff Sessions, have expressed skepticism of the consent decree process.

“One of the most dangerous, and rarely discussed, exercises of raw power is the issuance of expansive court decrees,” Sessions wrote in a 2008 report. “Consent decrees have a profound effect on our legal system as they constitute an end run around the democratic process.”

In November 2015, Sessions went even further during a Senate hearing.

“There is a perception, not altogether unjustified, that this department, the Civil Rights Division, goes beyond fair and balanced treatment but has an agenda that’s been a troubling issue for a number of years,” Sessions said, according to NBC News.

For the current DOJ, the decrees are a tool used to inject reforms into departments it deems to be in violation of the Constitution.

Maryland state Sen. Joan Carter Conway says the efforts are estimated to cost the city about $30 million to implement, according to the Baltimore Sun. The reforms will reboot the department’s civilian oversight, adopt an approach which focuses on community-oriented policing, see to it that officers use de-escalation techniques and proper use of force, and ensure full and fair investigations into allegations of employee misconduct, among other efforts.

“The agreement is robust and comprehensive,” said Lynch. “It will help BPD gain the cooperation it needs from residents to fight and prevent crime. Most importantly, it reflects significant input from the people of Baltimore.”

Despite the high praise and claims of significant input from Lynch and other officials, the police union representing most rank-and-file officers in the BPD — the men and women subject to the reforms — said they didn’t have any input on the process.

“Despite continued assurances by representatives of the Department of Justice that our organization would be included in the consent decree negotiations, no request to participate was ever forthcoming and we were not involved in the process,” the Fraternal Order of Police Lodge 3 said in a statement, according to the Baltimore Sun.

Still, the agreement has to be finalized by Judge James K. Bredar, a federal judge appointed by President Obama in 2010. Bredar will review the agreement and determine whether it’s fair and would adequately serve the public. He can make changes to the decree and call hearings, and the police union could get involved by filing motions to intervene in the case.

The Civil Rights Division of the DOJ boasts 20 such agreements with law enforcement agencies nationwide, with investigations into five other departments pending. On Friday, the department announced an investigation into the Chicago Police Department found “a pattern or practice of using force, including deadly force, in violation of the Fourth Amendment of the Constitution.”

The decree in Baltimore comes a day after a Pew Research Center survey found that most officers feel high-profile incidents between police and black people — for instance, Freddie Gray — make their jobs harder, making them more concerned about their safety, and less willing to stop suspicious-looking people.

Principal Deputy Assistant Attorney General Vanita Gupta, the head of the Civil Rights Division at the DOJ, hopes Thursday’s decree helps ease such concerns for both citizens and police.

“I firmly believe that when focused, measurable and detailed reforms are implemented effectively, they restore community trust and advance officer and public safety,” she said.