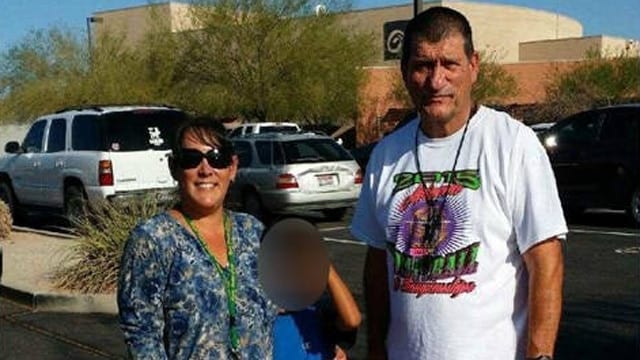 The trooper involved in the incident was identified as Edward Andersson (right), a 27-year veteran with the department. (Photo: KPHO/KTVK)

A man who witnessed an Arizona trooper being attacked on the side of the highway near Tonopah early Thursday morning shot the officer’s attacker and authorities say if it wasn’t for the passerby’s brave actions, the trooper likely wouldn’t be alive.

The suspect died as a result of his injuries and, although he faces a long recovery, the trooper is expected to be okay, according to the Arizona Department of Public Safety.

The incident unfolded around 4 a.m. as officers were responding to a report of shots fired on a remote stretch of Interstate 10. Trooper Edward Andersson arrived on the scene and saw what appeared to be a rollover accident. Moments later, gunfire erupted in what authorities are describing as an ambush.

Andersson was shot in the shoulder and chest, after such time a physical fight ensued between him and the suspect.

Soon thereafter, another man happened upon the scene when he noticed the suspect repeatedly slamming Andersson’s head into the pavement. Andersson yelled at the man for help and the passerby then retrieved a gun from his vehicle.

The passerby commanded the suspect to stop, but he refused and continued to attack Andersson. The passerby then fired an unknown number of shots, striking the suspect. He then got on Andersson’s police radio and called for assistance.

The suspect was transported to the hospital where he was later pronounced dead. Andersson was also taken to the hospital and underwent surgery. He is expected to survive. A woman involved in the rollover crash died as well. The identities of the woman and the suspect were not immediately released.

DPS Director Frank Milstead said Andersson would not be alive were it not for the assistance of the good Samaritan.

The investigation, which is being conducted by state detectives, is still ongoing, but authorities have reason to believe the suspect who shot Andersson was the driver of the vehicle involved in the rollover accident.