DOJ: Chicago police have engaged in pattern of Constitutional abuses 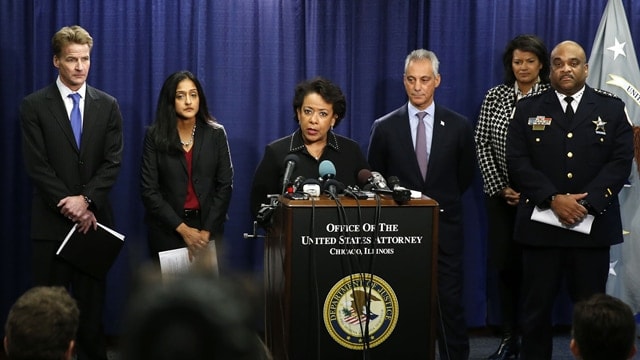 The Chicago Police Department has a broken system of accountability, poor training and supervision, and has consistently violated the Fourth Amendment in its use of force, according to a Justice Department report released Friday.

The DOJ’s 161-page report comes after a 13 month investigation of the country’s second largest police department. The feds launched the civil rights investigation after the release of a video showing a white officer shooting 17-year-old Laquan McDonald, a black teenager, 16 times on the city’s South Side.

“One of my highest priorities as Attorney General has been to ensure that every American enjoys police protection that is lawful, responsive, and transparent,” said Attorney General Loretta Lynch in a news release. “Sadly, our thorough investigation into the Chicago Police Department found that far too many residents of this proud city have not received that kind of policing. The resulting deficit in trust and accountability is not just bad for residents – it’s also bad for dedicated police officers trying to do their jobs safely and effectively.”

The Justice Department deployed the “largest team ever” to Chicago in preparing the report. Investigators observed roll call at all 22 CPD districts, went on more than 60 police ride-alongs, heard from more than 340 CPD members and 1,000 community members, and reviewed thousands of documents, including force reports from more than 170 police-involved shooting investigations and 400 more incidents involving police use of force.

“We found that the Chicago Police Department engages in a pattern or practice of using excessive force, including deadly force and non-deadly force,” said Principal Deputy Assistant Attorney General Vanita Gupta, the head of the Civil Rights Division at the DOJ. “This pattern includes, for example, shooting at people who present no immediate threat and tasing people for not following verbal commands.”

Gupta said investigators watched a CPD training session where officers were shown a decades-old video on deadly force, which included “guidance inconsistent with both current law and internal policy.” The department found that officers don’t fully report use of force instances, and that discipline for officer misconduct either doesn’t happen, or is unpredictable and ineffective.

In an Op-Ed published Wednesday in the Chicago Sun Times, Emanuel said it’s important the efforts to reform CPD don’t bring with it the demonization of Chicago police.

“If the reforms we must, and will, make are seen as demonizing the police, the police will naturally become reactive. They’re only human,” the mayor wrote. “The clarity, certainty and standards they need to do their jobs will be lost, and the result will be more violence. That is not a recipe for success in our communities.”

“Still, there’s no question that further reforms are needed and much work remains to restore trust,” he said.

The DOJ and city officials signed an agreement outlining how they’ll work together to create a consent decree, with public input, that would work to reform the Chicago Police Department. On Thursday, officials in Baltimore signed just such a decree, after the Department of Justice released a similar report detailing abuses at the Baltimore Police Department late last year.

The DOJ is working to finalize such agreements before President-elect Donald Trump gets the keys to the White House. Trump and his pick for attorney general, Alabama Sen. Jeff Sessions, have expressed skepticism of the consent decree process, a primary tool used by current DOJ officials to reform departments in violation of the Constitution.

“We know that for both residents and officers, the days when the Justice Department announces our findings are difficult. But today is also a moment of opportunity, where we begin to move from identifying problems to developing solutions.” said Gupta.