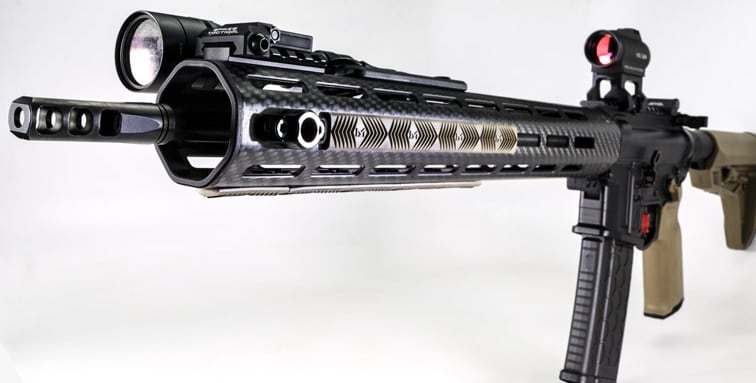 The Streamline Caarbon handguards by Faxon Firearms will launch with Ranier Arms in a 15-inch configuration. Additional models will follow. (Photo: Faxon Firearms)

Faxon Firearms jumps into the carbon fiber game with the release of a new series of Streamline Carbon handguards for the AR-15.

The rugged, yet lightweight handguards fuse Faxon’s patent-pending mounting architecture with Lancer Systems carbon-fiber. The rails mount to an AR-15 using a run of the mill, mil-spec AR barrel nut. When mounted, the 15-inch rails are locked into place across all three axis.

The rails weigh in at less than eight ouches, though an optional titanium nut barrel reduces that even further. A full-length Magpul M-Lok runs across all eight faces of the handguard, offering a slim profile able to accommodate suppressors put to 1.6 inches in diameter.

President of Faxon Firearms Bob Faxon said in a statement that the company aimed to match modularity with a lightweight design.

“As shooters, we designed the Streamline Carbon series of handguards like our Gunner barrels. We wanted all the functionality possible while reducing weight to the maximum extent possible,” said Faxon. “Usability and modularity were absolutely critical to our design process. We want shooters to pick up the Streamline Carbon option not just for its weight, but for superior utility for mounting accessories while handling arduous courses of fire.”

The new hand guards will launch at Ranier Arms in a 15-inch configuration. The company said 13.3 inch and 10.2 inch lengths are in production and set to be delivered later in 2017. The Streamline Carbon rails start at $329.