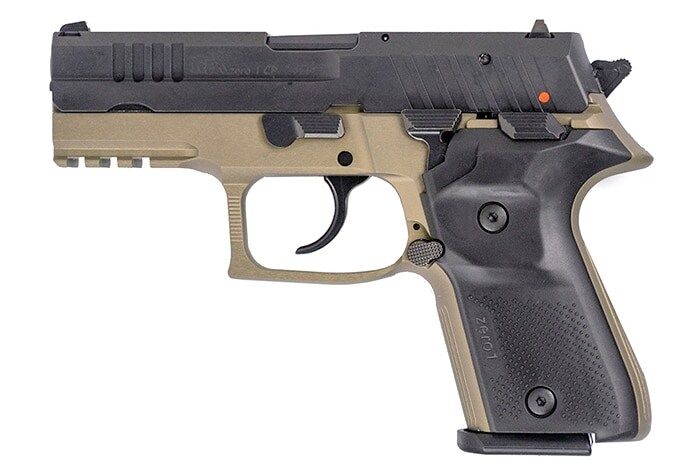 As SHOT Show looms just days away, Las Vegas based FIME Group jumped in on the gun announcements releasing details on new pistol and AK offerings for early 2017.

The popular Arex Pistol Rex Zero 1S model will see a new color this year in flat dark earth. In addition, the Rex Zero 1 will expand to include a compact version called the Rex Zero 1CP.

Chambered in 9mm, the compact hammer-fired pistol features a 3.85 inch barrel with a 7.1 inch overall length. The Rex Zero can be “cocked and locked” or safely de-cocked for double action/single action operation. The slide stop also serves as the de-cocker.

The compact Rex is southpaw friendly, offering an ambidextrous safety and magazine release.

Available in both black and flat dark earth, the compact Rex also features a 15 round magazine capacity.

The Rex Zero 1CP retails for the same price as its full-size counterparts, coming in at $670.

Also on the docket for 2017 is a new Vepr model AK-47. The 7.62×38 caliber rifle features a 16.5 inch barrel with folding stock. The RPK-style barrel is hammer forged and chrome lined in a process that makes it four to five times stronger than a standard AK barrel.

The Vepr model utilizes the original Molot left-side folding tubular stock. The stock comes with a cheek rest and a rubber recoil pad.

This AK is equipped with scope mount side rails along with RPK style ribbed polymer hand guards with a stainless steel heat shield.