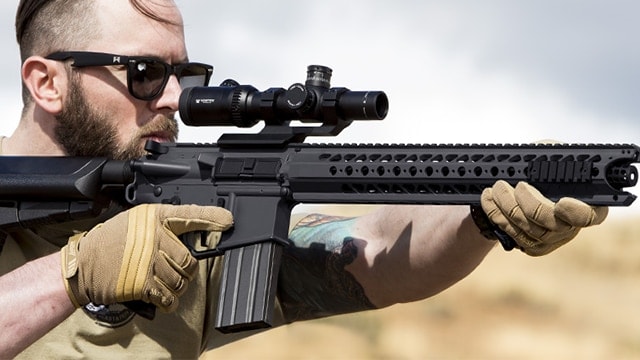 The .22-caliber Defiance Series of rifles will retail for $699 and in stores in 2017’s second quarter, the company says.

Offered in a variety of attractive Ceraktote color finishes, the DMK22 series features a 16.5 inch 4140 Chrome Moly barrel with a 1-in-16 inch twist rate.

The Defiance’s bolt catch with the included .22LR mag locks the bolt back when empty, even if the magazine is removed. Select 22LR AR mags will work alongside the rifle; though they won’t trigger the bolt catch.

Shooters that prefer to tweak their ARs can further customize the Defiance series through different barrel profiles courtesy of a patent pending barrel adapter system. Additionally, the DMK22 is compatible with most Ruger 10/22 aftermarket barrels as well as a select number of AR aftermarket trigger packs.

Kriss partnered with War Sport Manufacturing to bring one more version of the DKM22 series to life. The Low Visibility Operations Application rifle, or DKM22CC-LVOA, features the same specs as the aforementioned Defiance rifles but includes the War Sport LVOA modular handguard.