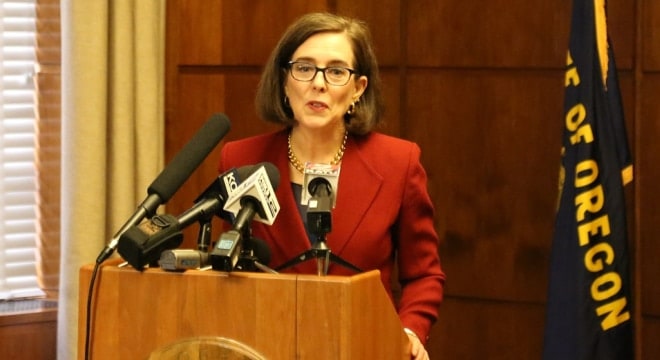 Fresh off an election victory won with support from gun control organizations, Oregon Gov. Kate Brown released her legislative agenda at her swearing in ceremony Monday asking lawmakers to close a series of “loopholes” in the state’s firearm laws.

The 2017 agenda identifies the “Charleston Loophole” and the “Boyfriend Loophole” as key issues. “As a community, we all agree that we must keep our families safe from violence too. We must continue the good progress we’ve made to keep guns out of the the wrong hands,” the one-page agenda says.

Both topics were broached in July alongside a spate of executive orders that included directing state police to track and analyze gun transactions.

At Brown’s request, lawmakers pre-filed legislation for the coming session. The measure would allow for an indefinite delay on firearms transfers between either private parties or a gun dealer while the state police perform a background check. Also, the bill would add those convicted of misdemeanor stalking or non-married domestic abuse offenses to the ranks of those barred from possessing firearms is expected in coming days.

One measure that did not make the cut this year is a drive to limit the sale and possession of magazines capable of holding an arbitrary number of cartridges. Brown told media the time wasn’t right for the proposed ban.

“I was committed to working with community activists and gun control advocates that believe in common sense legislation, and frankly we struggled to get broad support to move forward on that legislation, but it doesn’t mean that I am giving up,” she said.

Brown, the former secretary of state, came to office two years ago without taking part in the traditional electoral process. She succeeded Gov. John Kitzhaber upon his resignation following a corruption scandal in 2015.

Since in the Governor’s office, Brown has been a strong supporter of gun control, embracing a controversial bill to expand background checks to virtually all gun transfers.