$10K reward offered for info on theft of 65 firearms 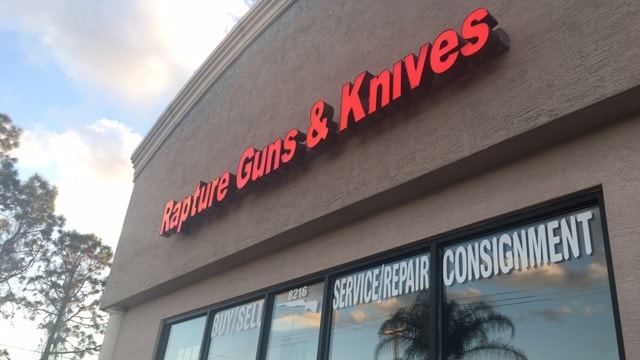 Authorities are offering a $10,000 reward for information on the thieves who made off with dozens of guns from a Florida gun shop during a smash and grab burglary earlier this month.

Rapture Guns and Knives, of Lakeland, Florida, was targeted in the early morning hours of Jan. 9 and the thieves made off with 65 firearms, according to an ATF press release.

Security cameras captured footage of the suspects, who smashed the glass display cases and emptied the contents into large bags. Authorities believe they gained access to the store by drilling out the lock on the front door.

Police were on the scene within two minutes of an alarm being activated, but the suspects were already gone. According to Polk County Sheriff Grady Judd, there was a nine-minute delay between the time the suspects broke in and the time the sheriff’s office was notified.

Just weeks before the break-in occurred, the sheriff’s office reached out to local gun shop owners and emphasized the importance of adequately securing and storing their merchandise. According to Judd, the owner of Rapture Guns and Knives, Ben Pollock, told the sheriff’s detectives that “safes are too expensive” and cables would just be cut by thieves.

Judd, however, shot back by saying, “Gun store owners have a moral and ethical obligation to do everything they can to prevent guns from getting into the hands of criminals.”

Even after the break-in, Pollock, who experienced another break-in several years ago, still argued that as a small, family-owned business safes would be a “huge expense.”

However, Pollock and Judd agreed on one thing: 65 stolen guns on the street isn’t a good thing.

“I don’t know how they plan to get rid of the guns, but it can’t be good,” Pollock said.

The suspects are believed to be two white males, but it’s unknown what type of vehicle was used to make their escape or in which direction they fled. Video of the suspects can be viewed here.

Anyone with information is asked to contact the ATF at (800) ATF-GUNS, the Polk County Sheriff’s Office at (863) 298-6200, or through the ATF’s mobile app. All tipsters can remain completely anonymous.

The ATF has teamed up with the National Shooting Sports Foundation to offer a collective reward of $10,000 for information leading to the arrest and conviction of the two suspects responsible for the burglary.