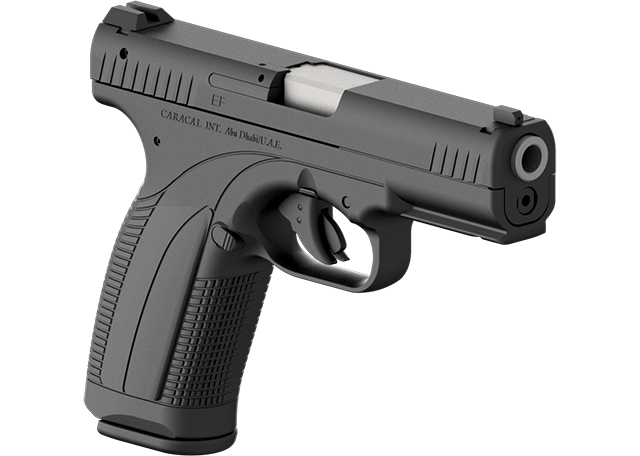 The Enhanced F is an updated take on the company’s standard F series, which was sidelined in 2012 after a safety recall. The Enhanced F series sticks with the 9mm, striker-fired polymer design. Featuring a barrel length of 4 inches with overall slide length measuring 7 inches, the Enhanced F weighs in at just over 1 pound.

The pistol comes equipped with a rail interface system for lights, laster and other accessories. In addition, it utilizes an ergonomic design with intuitive grip angle and an ambidextrous magazine catch.

The biggest upgrade to the Enhanced F series is its redundant safety system. The original F series recall related to an alleged defect that made it possible for the gun to fire if dropped onto a hard surface. It looks like Caracal is addressing this safety concern by introducing a whole new safety system that consists of an integrated trigger safety, firing pin safety and drop safety.

Caracal Director of Marketing Jae Gillentine said in a statement the new pistol will be both user friendly and “will hold up to the rigors of tough environments.”

“Listening to our customers and incorporating their feedback, we’ve completely redefined the Caracal F pistol. The Enhanced F is designed to perform and it’s evolution brings with it many of the important features and upgrades that today’s shooters have come to expect from a world-class product,” she said

Retailing for $599, the Enhanced F ships with two 18 or 10-round magazines, a cleaning kit, cable lock and instruction manual in a plastic carry case.

The CAR814 A2 is a gas operated, direct impingement rifle chambered in 5.56. Designed for military and law enforcement applications, the rifle is available in semi-automatic and select fire configurations. Featuring a 16 inch barrel, the rifle measures just over 36 inches with the stock fully extended. Without the included 30 round magazine, the CAR814 A2 tips the scales at an even 7 pounds.

The rifle is equipped with Magpul furniture to allow shooters to configure the gun to fit specific mission needs. The rifle also includes a two point quick detach sling and flip-up rear sight.

The CAR816 A2 is chambered in 5.56 with various barrel configurations. (Photo: Caracal USA)

Rounding out the new goodies from Caracal is the CAR816 A2. Also chambered in 5.56 this rifle features a short-stroke, push rod gas pistol operating system. Also available in semi-automatic and select-fire configurations, the CAR816 A2 offers various barrel lengths to include a 10.5 inch CQB, 14.5 inch carbine and 16 inch infantry rifle.

Equipped with a proprietary hand guard, the CAR816 A2 allows for user modification using the M-Lok attachment system. The upper receiver and hand guard offer a full length 1913 Picainny rail for direct mounted optics or other shooting accessories.

Shipped with a  quick detach slide, cleaning kit, one 30 round mag and front and rear flip-up sights, the rifle retails for $1,850.