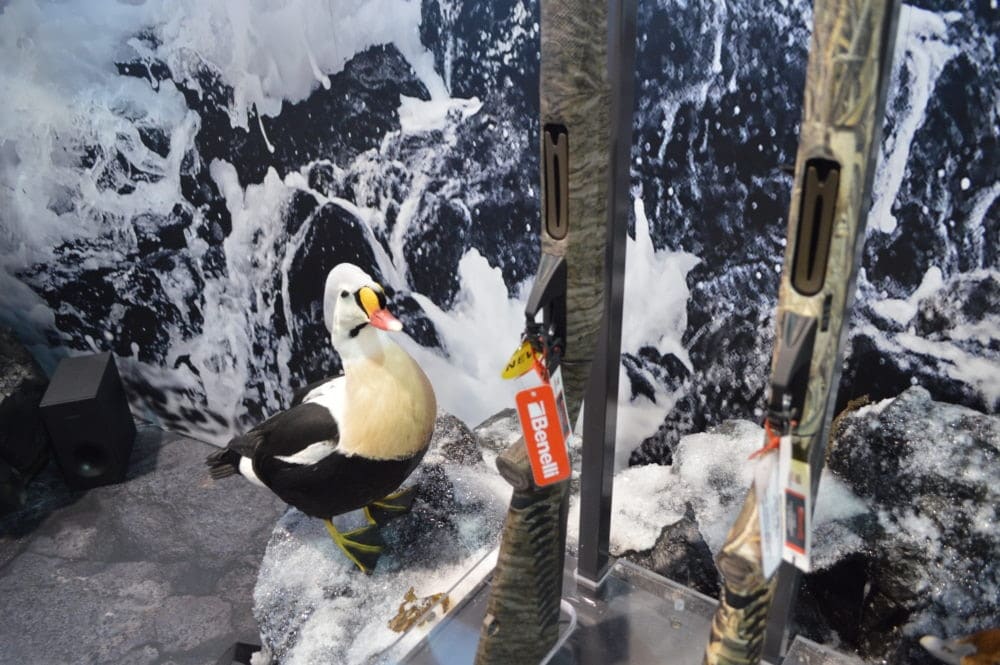 A King Eider duck, the subject of Benelli’s “To Kill a King” series next to the new SBE3 shotguns. (Photo: Kristin Alberts/Guns.com)

Not the smallest news from Benelli is their splash into the entertainment industry with the introduction of a two-part Outdoor Television documentary “Benelli Presents to Kill a King.” The story chronicles the dangerous and exciting hunt for Bering Sea King Eiders, a large duck found on Arctic waters, recognized as one of North America’s most spectacular waterfowl species. Footage is sure to be something to see in one of the most inhospitable hunting environments on the planet. The first part airs Jan. 23 at 9pm EST and the second Jan. 30 at the same time. 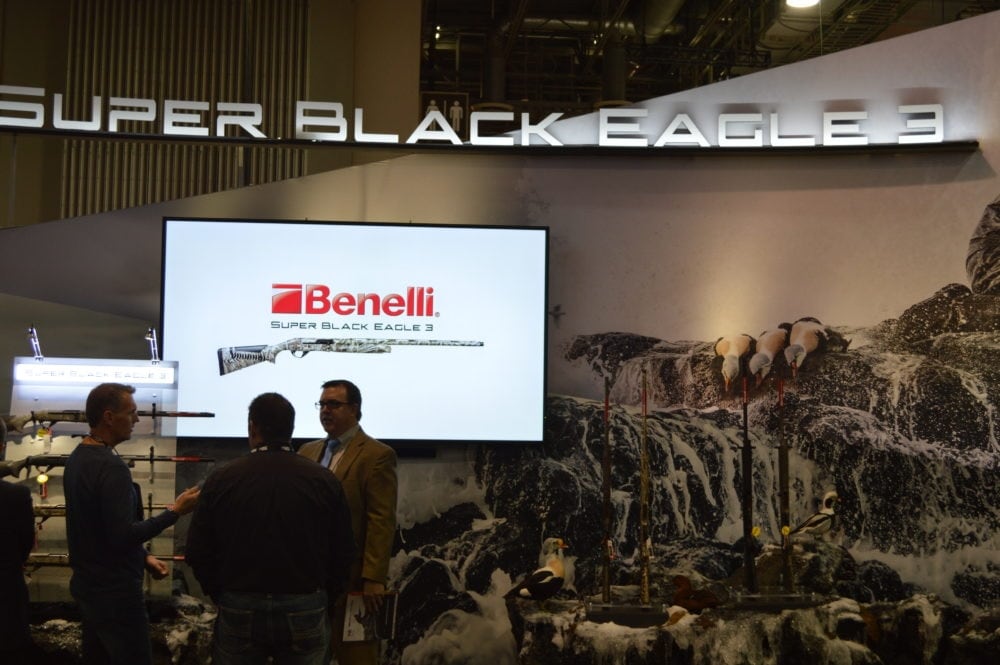 All the buzz at Benelli’s SHOT booth surrounds the release of the Super Black Eagle 3. (Photo: Kristin Alberts/Guns.com)

If all that hunting adventure talk has you salivating for guns, Benelli has not left you high and dry.  The biggest news from the company in 2017 is the launch of the Super Black Eagle 3 inertia-driven 3.5-inch semi-auto shotgun.

The new model boasts many new features, most geared toward hardcore hunters.  Everything centers around the “Easy Locking System” and “enhanced breech-closing system that eliminates the possibility for a shooter-induced stoppage when trying to softly close the bolt or when the shotgun is treated roughly in the blind.”

Other cold-weather/hunter-friendly features include oversizing of the bolt handle, bolt release, safety, loading port and a re-work of the magazine cap.  All these changes make life easier for gloved hunters in adverse conditions. 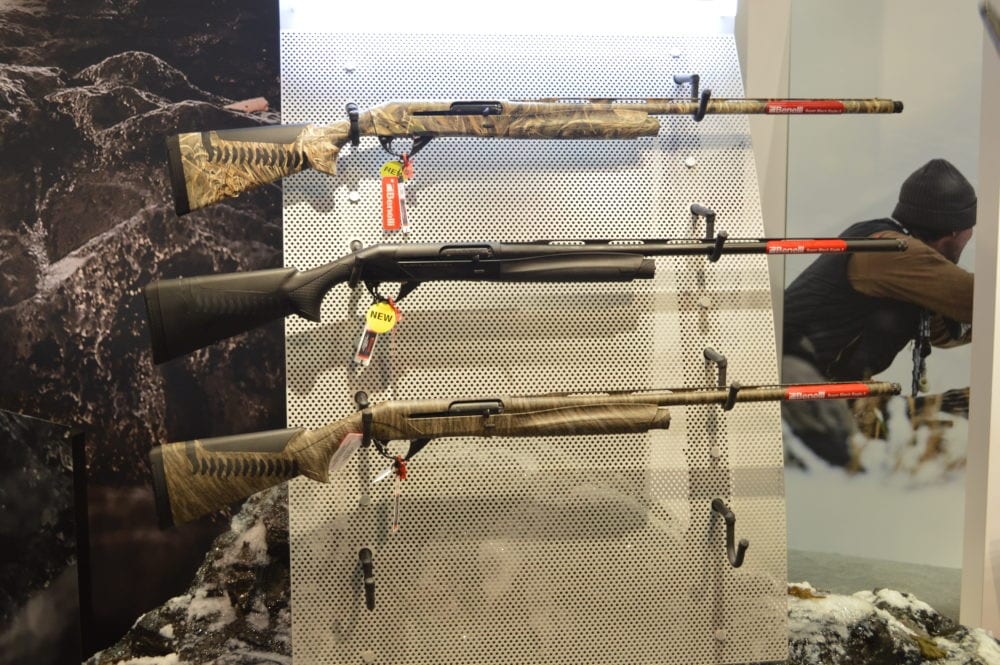 In addition to those supersizing options for gloved hands, Benelli has included an “Easy Fitting System” with the SBE3 which means a shim kit allowing for up to eight different cast and drop configurations.  And though the new third generation Black Eagle is slightly lighter than its predecessors, felt recoil is reduced with a re-worked ComforTech stock and Combtech cheek pad. 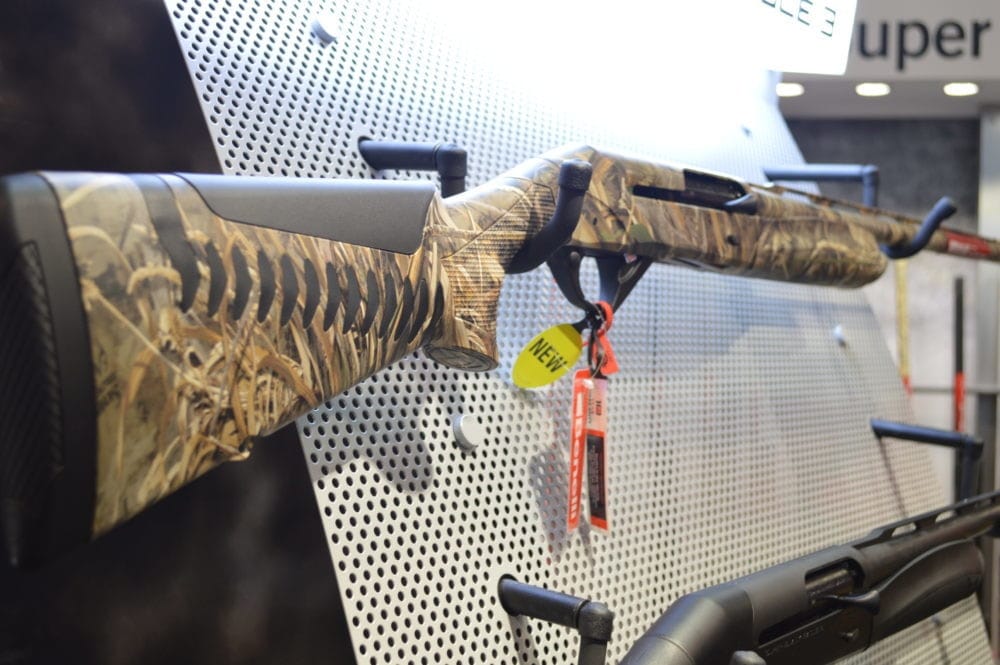 Detail of the improved ComforTech stock with the spring-softened Combtech cheek pad. Everything is geared toward reducing felt recoil in the lighter SBE3. (Photo: Kristin Alberts/Guns.com)

Initial offerings of the SBE3 12-gauge will come with either a 26- or 28-inch barrel, weigh in just a hair over seven pounds, and comes standard with both three Extended Crio tubes and two flush mount chokes. There will be two finish options on the introductory models: black synthetic, which retails for $1,899 and a Realtree Max-5 camo version for $1,999. By fall of 2017, the company will also begin shipping both Mossy Oak Bottomland and Gore Optifade Timber patterns.