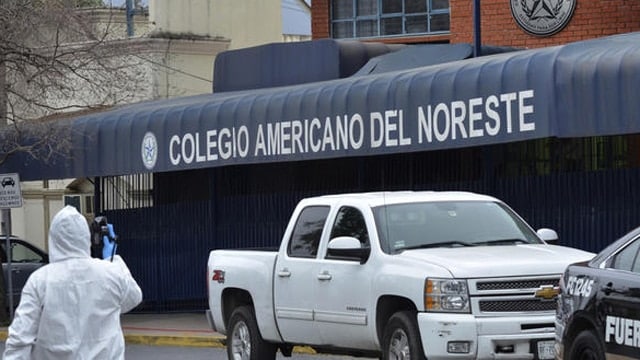 A 15-year-old boy opened fire inside the classroom of a Monterrey, Mexico, school Wednesday, wounding four before turning the gun on himself.

One student at the Colegio Americano del Noreste was struck in the arm and has since been released from the hospital, while two more students, as well as their 24-year-old teacher, were all struck in the head and are now fighting for their lives, Fox News reported. The teen shooter died from self-inflicted injuries.

Chilling video from the school’s surveillance system captured the entire incident, which unfolded in less than a minute.

The teen is seen in the classroom full of kids, sitting at a desk before he pulled a .22-caliber handgun from his pocket and opened fired. He then walked around the classroom and seemed to fire randomly while the injured students and teacher can be seen lying on the floor.

The teen then put the gun to his own head and pulled the trigger, but was apparently uninjured. He then retrieved a backpack from the back of the classroom, presumably to reload the gun. The teen then appeared to say something to his classmates before they all frantically ran out of the door. Moments later, he again put the gun to his head and successfully took his own life. None of the victims’ names have been released.

There is no clear motive at this point, but according to The Los Angeles Times. The shooter was undergoing treatment for depression. Nuevo Leon state security spokesman Aldo Fasci also noted that photographs of the shooter had recently been posted on social media. Fasci did not elaborate but said the person responsible for the photos would face punishment.

Fasci confirmed that the teen brought the gun from home, but did not say to whom it belonged. Authorities are also investigating how the boy got the weapon into the school. Fasci said student bags were previously searched at security checkpoints around the school, but – for reasons which are not known – that protocol is no longer being practiced.

“There was a reason why book bags were checked,” Fasci said. “I think we are going to have to start doing it again.”