Weatherby's changing of the guard at SHOT Show 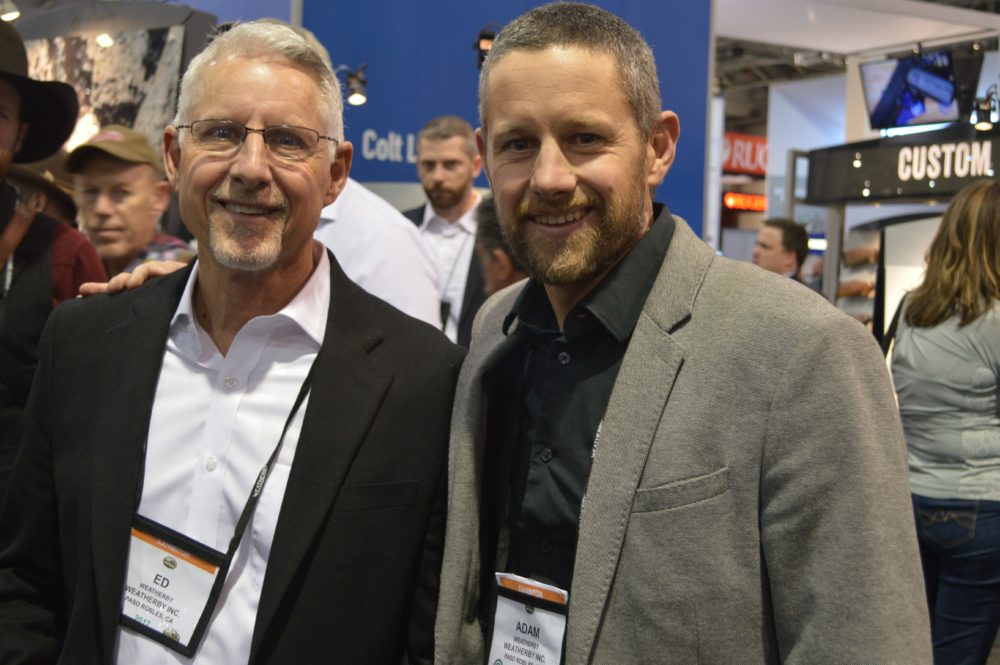 Both father and son raised a glass in commemoration of their formal shift, which included a brief video of the family’s passion for the outdoors through the year.

The company reassured buyers that the transition won’t disrupt operations or distribution. In fact, the move has likely been in the works for some time, as successor Adam has been working as Vice COO under his father for several years.  And during Adam’s acceptance speech, his first in his new role, he jokingly reassured the media-heavy crowd that his father would still be keeping an eye on things.

Family-owned Weatherby was founded in 1945 by Roy Weatherby as a rifle company based in Paso Robles, California. Outgoing leader Ed Weatherby has served as president and COO since 1983, and will move into the position of Executive Chairman as Adam assumes power.

Much like his father, Adam grew up surrounded with the pride of the Weatherby name, a deep love for the outdoors, hunting, and an eye for firearms design, cartridge innovation, and a commitment to conservation.  Adam and his wife, Brenda — along with their children — are active hunters and outdoorsmen, which bodes well for the future family legacy of the company.

Since the early years, Weatherby has grown and evolved to position themselves at the top of their game, now offering full lines of rifles, shotguns, ammunition, and accessories.  Known predominantly for their Mark V and Vanguard lines of rifles and sporting shotguns, time will tell where Adam’s leadership will take the company in its third generation.

In an earlier press release, Adam vowed that “What my Grandfather Roy started more than 70 years ago is as special today as it’s ever been, and as president I’ll never stray from his vision and our promise to customers that ‘nothing shoots flatter, hits harder or is more accurate’ than a Weatherby.”

And Ed leaves Adam with a lineage of knowledge and passion, as Ed himself says, “I grew up absorbing everything about rifles and cartridges from my Dad, whether we were in the shop working or out in the field hunting. It was an amazing journey, and one I was able to pass on to my own son.”