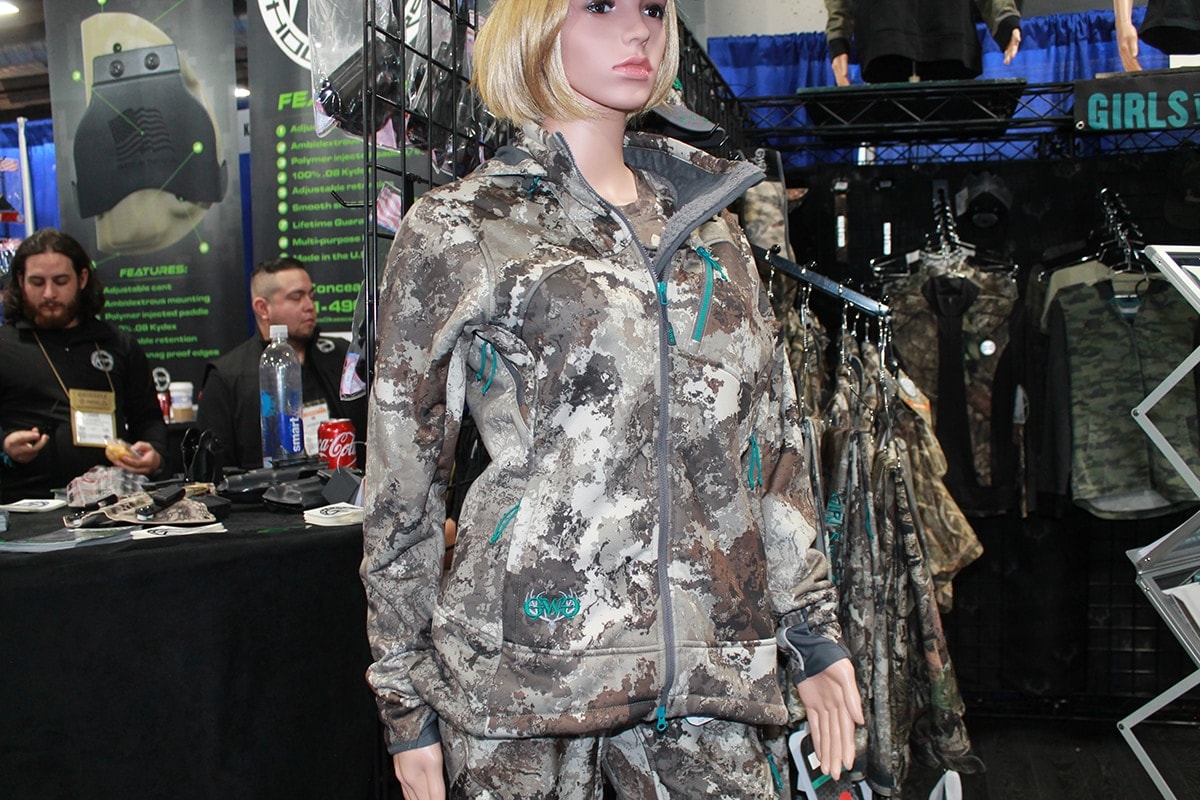 Alpine is a lighter camo pattern featuring grey and teal accents. The Alpine line is a stylish alternative to the traditional pink and camo trend. The new line covers a range of products to include performance tees, pants, shoftshell vests and jackets. 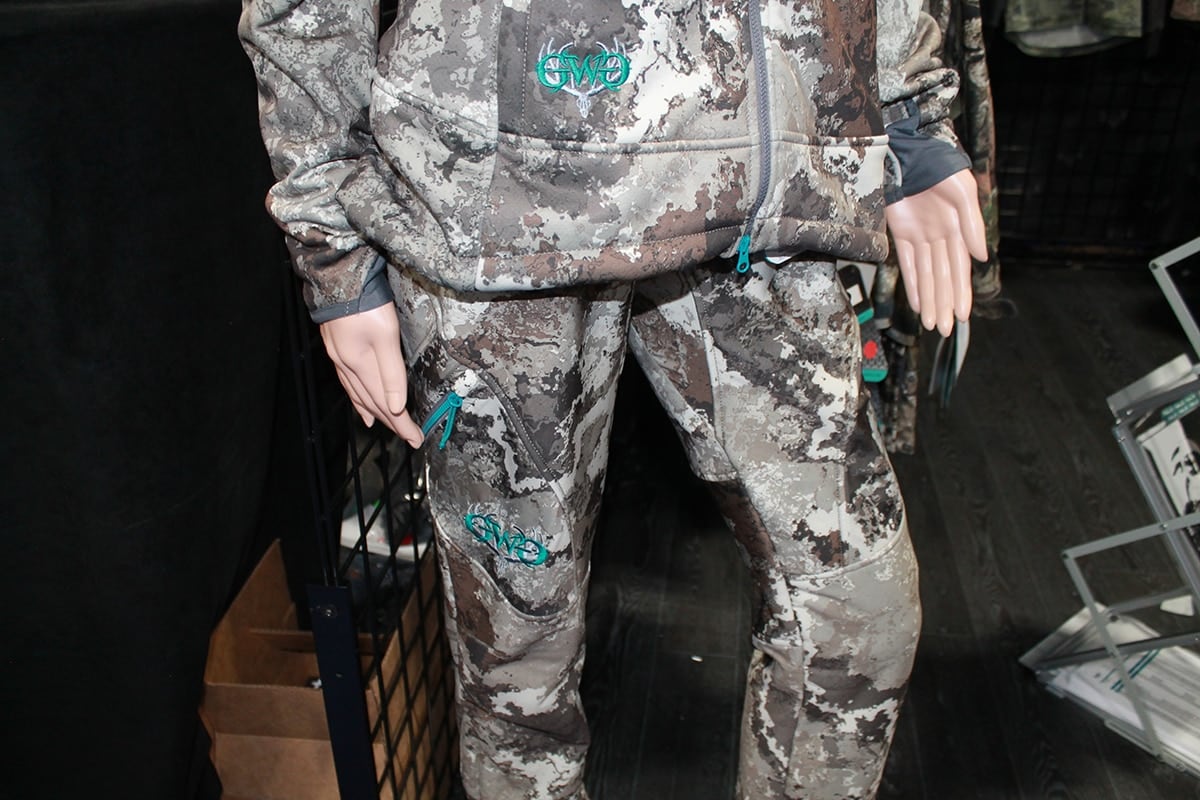 The Artemis soft shell pants are available in sizes XS up to 2X and feature snaps on the ankle so wearers can easily adjust the length of the pants. (Photo: Jacki Billings)

In addition to the Alpine products, Girls with Guns also showcased their athletic gear. The workout line allows women to sport their favorite camo while training. Available in Alpine and Mossy Oak Country, the line starts with athletic pants, jackets and pullovers and extends all the way to strappy sports bras. 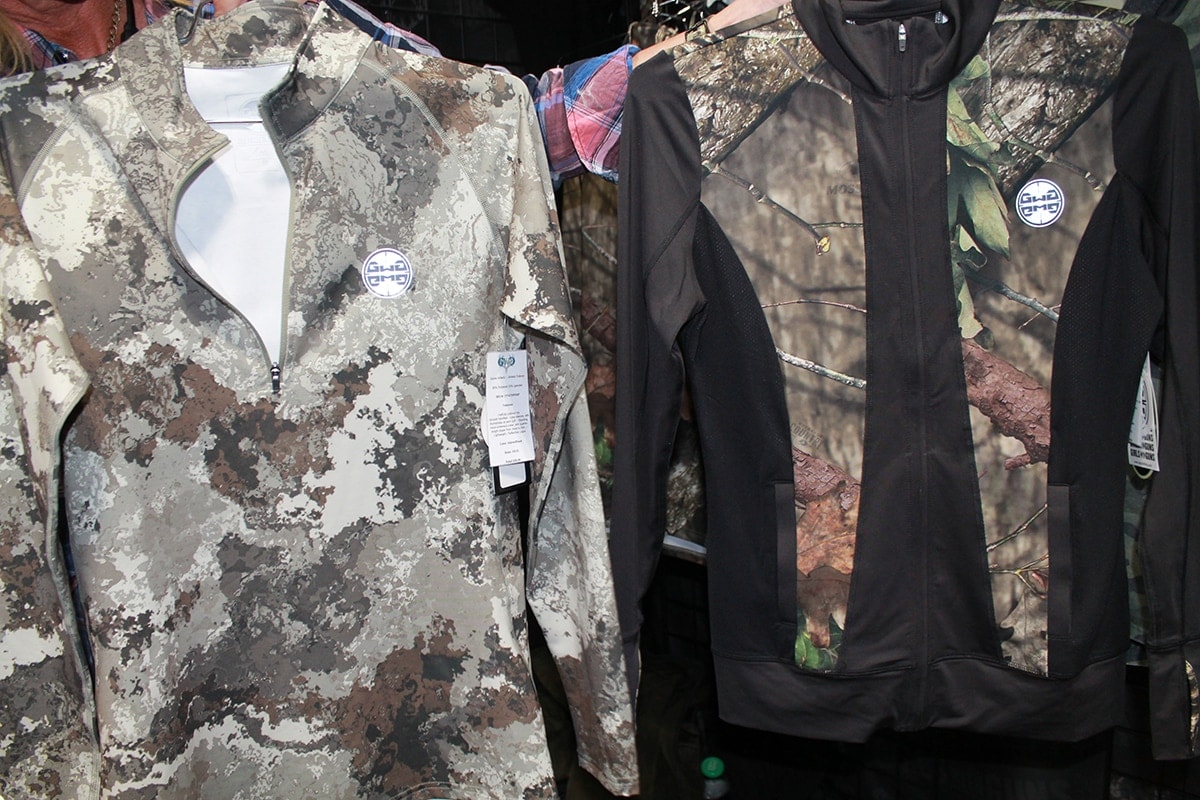 For ladies who like to wear their Girls with Guns gear to the gym, the company also makes athletic gear in Alpine camo, left, and Mossy Oak Country, right. (Photo: Jacki Billings) 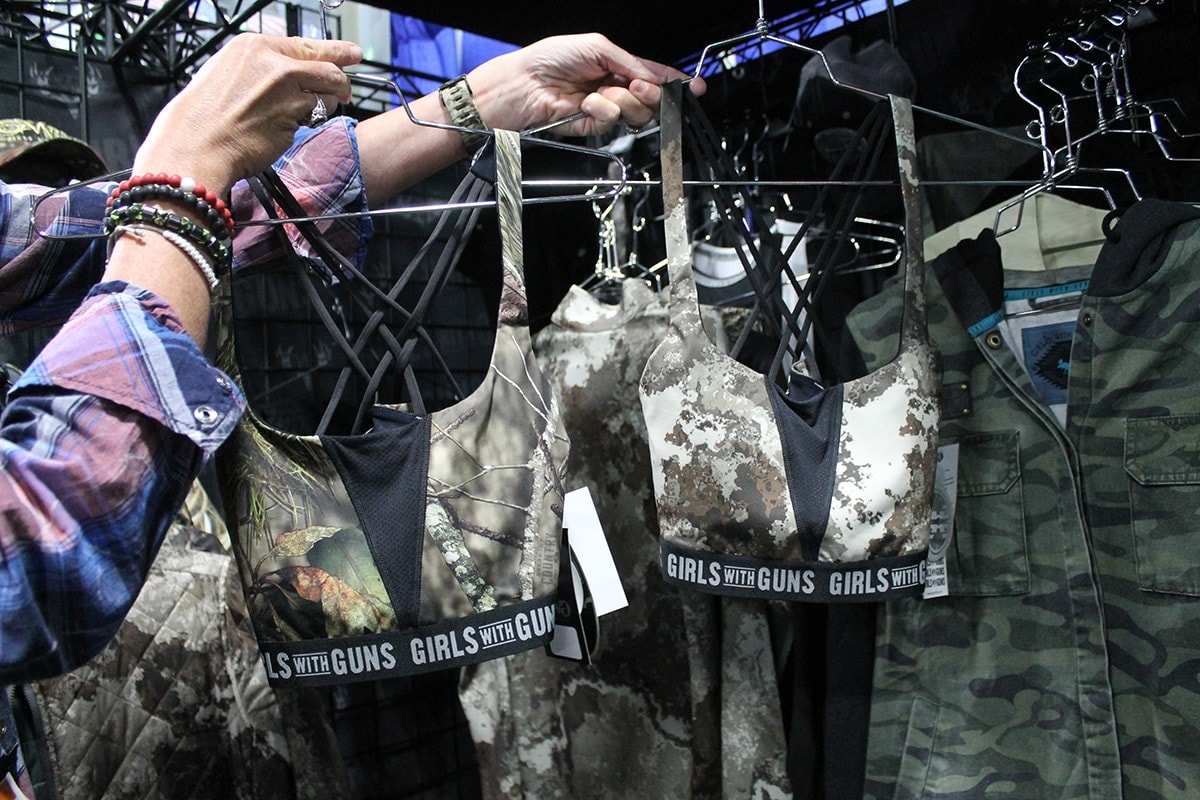 Topping off the newest products for 2017 are new hunting and shooting vests. As more states have jumped on board the pink craze and are now allowing female shooters to wear blaze pink, it’s only fitting that Girls with Guns would introduced a new blaze pink hunting vest to augment their blaze orange. A lightweight vest with two cargo pockets, the blaze pink or orange will definitely help female shooters stand out in the wild. 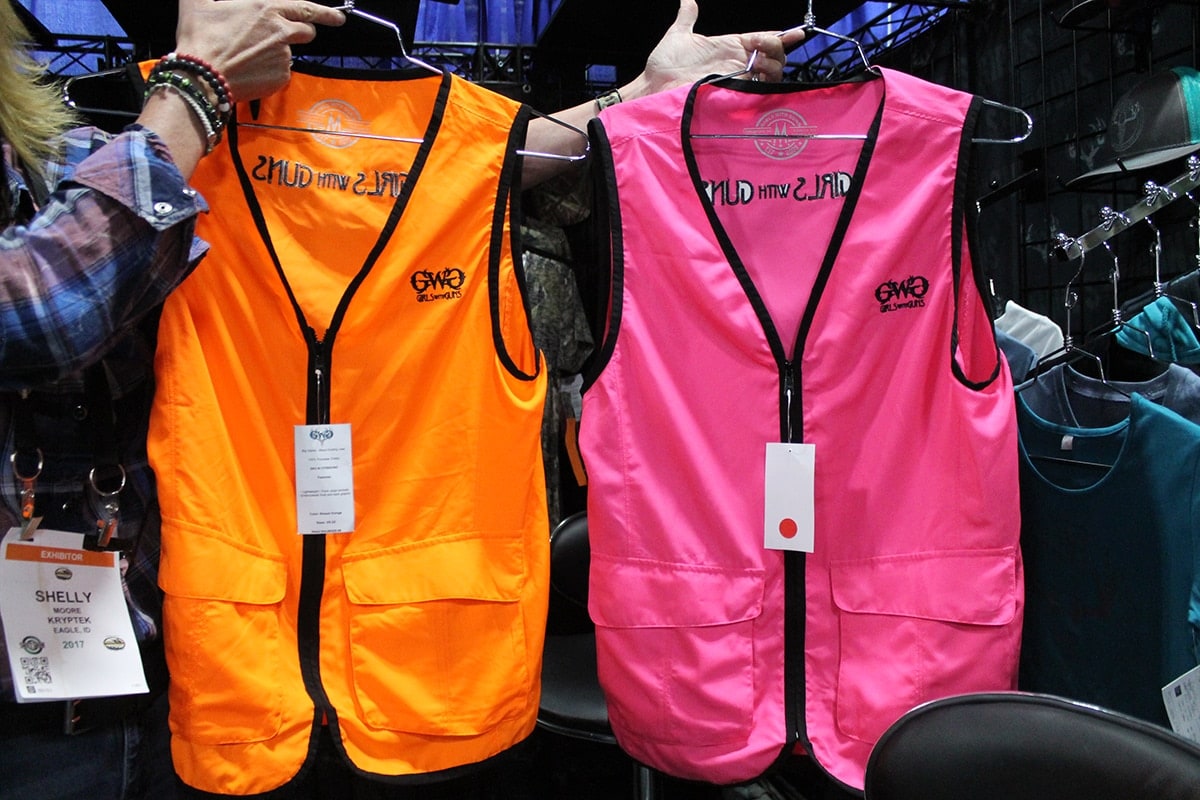 Sport shooters also have the option of a full vest or half vest. Colored in a rich, charcoal grey, the full vest is tailored to fit women’s bodies. Featuring a mesh back for breathability and ambidextrous, recoil reducing shoulder pads, the vest is also equipped with large front pockets and a large back pocket. The half vest, also in charcoal grey, is one size fits all with an adjustable waist band. Utilizing double, oversized shell pockets and a rear back mesh shell pocket, the vest is perfect for shooters who prefer a simpler approach. 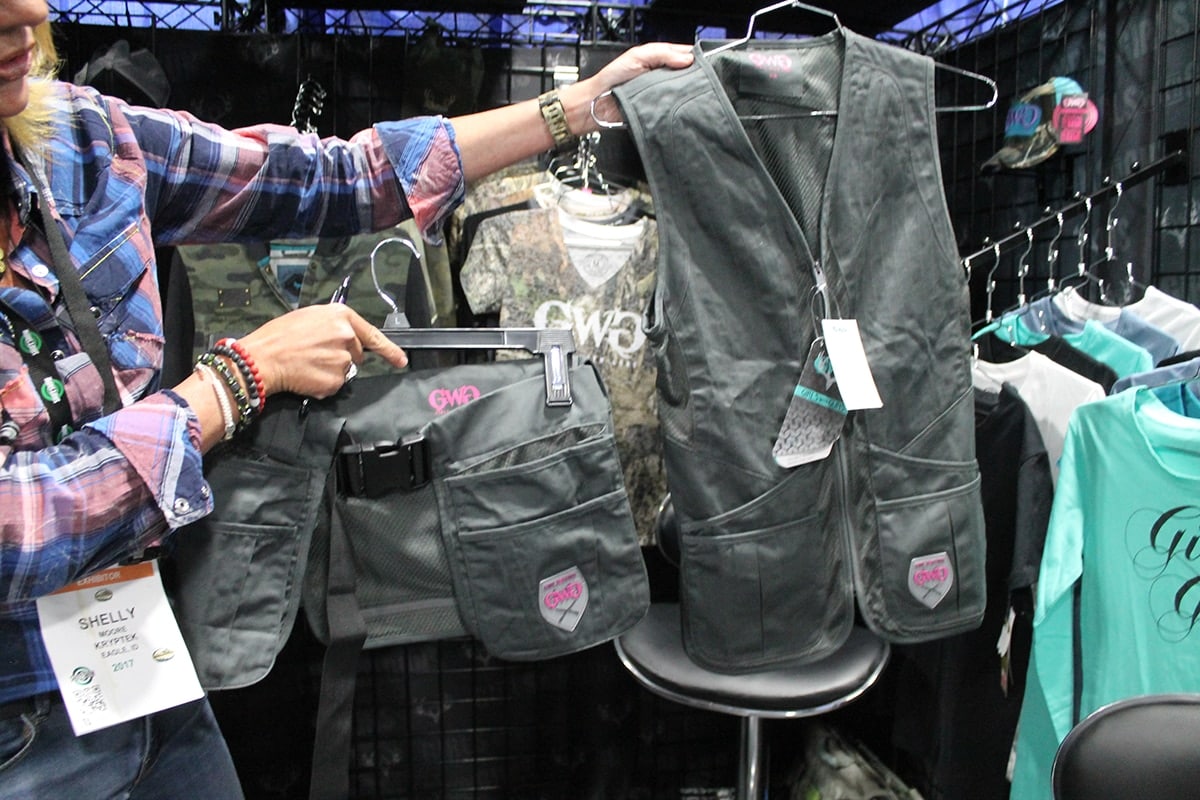 Girls with Guns covers shotgun girls too with the half vest, left, and the standard shooting vest, right. (Photo: Jacki Billings)

Girls with Guns sizes range from the small end up to 1X. The company says it’s important to celebrate all women, no matter shape or size. The new line ranges in price and will be available in early July.