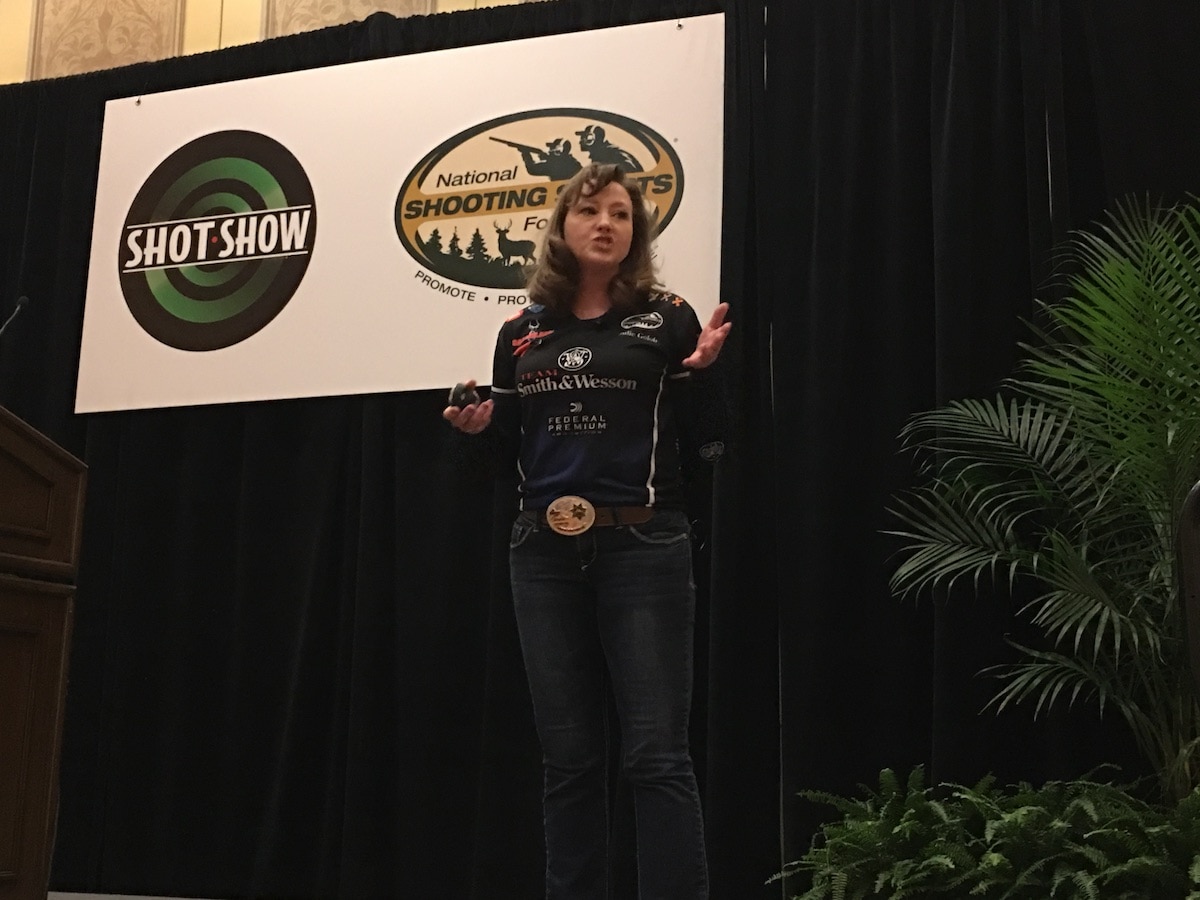 Social media has turned marketing on its head, offering a new way for gun retailers to interact and draw in customers, but not all gun retailers are in on the craze. The National Shooting Sports Foundation aims to change that.

With 78 percent of Americans on social media, social media has become the fastest and most cost-effective means of marketing and advertising. Recognizing that there are still some within the gun industry who are reluctant to embrace the new way, the NSSF employed shooting wonder-woman and social media expert Julie Golob to bring gun retailers up to speed.

Gun retailers and exhibitors curious on how to propel their brands forward packed into the conference room to learn more from Golob. She began her presentation by explaining the uses of each platform and how they drive content.  Golob then dove into the heart of what makes a social media campaign and the business behind it successful — engagement. Golob pointed to her large social media following of which she built through active interaction.

“If someone has a question, I answer it. If someone offers a kind word, I thank them,” Golob said, adding that she doesn’t let haters and trolls get her down.

“I engage the negative commenters too, but with respect.” Golob said. “When you engage them it reminds them that there is a person behind the keyboard. It’s easy to type angry words at a keyboard, but it’s a lot harder when you know there is a real person on the other end.”

Among the biggest concerns of gun industry attendees was Facebook’s 2016 crackdown on gun sales on its platform. Several gun shops said they’d had their business flagged, pages removed and that made it to market and advertise.

Golob’s answer: think outside the box. From National Pizza Day to employee enthusiasm, Golob urged retailers to come up with creative means to push their brand and business that won’t set off bells and whistles at Facebook HQ.

“If you have an employee who is always taking selfies, make them work your Instagram page. If you have an employee who is a great public speaker, hand them a phone and put them on Facebook live to show off some of their favorite in-store products,” Golob said. “National Pizza Day is coming up. Throw a pizza party and post that on Facebook or print off pizza targets and tell your audience to come enjoy a slice.”

The key, she said, was to remember that social media is social. Passive posting won’t propel a business, but active posting will. Golob topped off the seminar by encouraging her listeners to not feel frustrated by social media, but instead embrace it as another tool in their marketing toolkit.