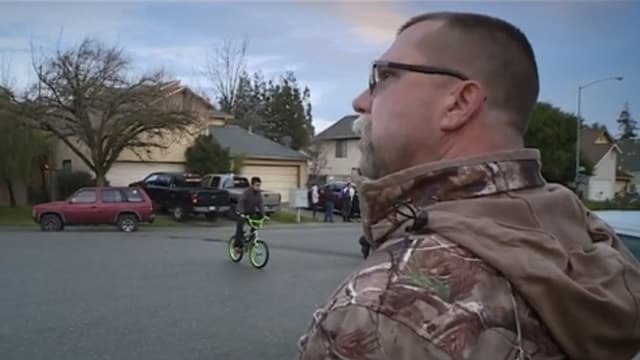 Neighbor Jody Lawhon, who witnessed the incident, said the area is normally quiet and peaceful but the suspect has terrorized them for months. (Photo: CBS)

A man was shot and killed early Friday morning in Manteca, California, after he allegedly charged at his neighbor while swinging a tire iron.

Neither the suspect nor the victim have been identified, but the neighbor who fired the shots was taken into custody, according to a statement by the Manteca Police Department.

The neighbor told police that he witnessed the suspect slashing tires and breaking car windows before swinging a tire iron at him. Police questioned the neighbor before releasing him. No charges have been filed at this time.

According to the statement, officers received two calls about the incident. When they arrived, they found the suspect with two gunshot wounds — one to the shoulder and another to the chest — as they arrived to the scene around 3 a.m. He was transported to a local hospital where he later died.

Jody Lawhon, who also lives in the neighborhood, told reporters he witnessed the entire incident unfold from his balcony. He said the suspect, who he identified only as Caesar, could have stopped, turned around, and just walked home, but he kept coming at his neighbor.

Lawhon said his neighbor who fired the shots is distraught over the shooting but also felt he had no choice in the situation. “To me, it’s a clear case of self-defense. I would’ve done the same thing,” Lawhon said.

This apparently wasn’t the first incident the neighborhood has had with Caesar either. Recently, he was captured on cell phone video walking down the street swinging a hammer. Lawhon said the neighborhood has been terrified of Caesar for months, and in fact, some of the residents even went to the city council seeking help, to no avail.

Lawhon said he wishes something else could have been done to stop the man. “I’d like to say I’m sorry to his family,” Lawhon said. “This should’ve never happened.”