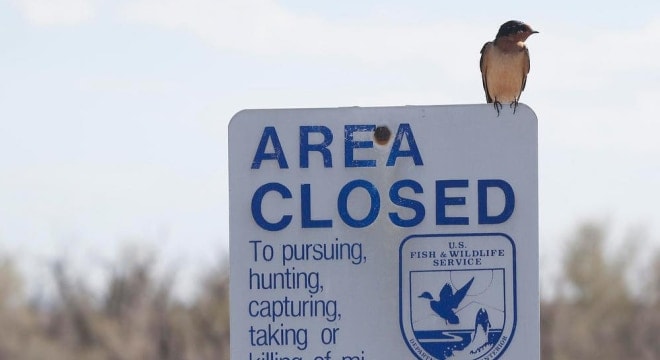 As of October 2016, the National Wildlife Refuge System is responsible for managing more than 850 million acres of lands and waters and could soon be closed to lead ammunition and fishing tackle. (Photo: Katie Theule/USFWS)

The day before the completion of his appointment last week, the head of the federal agency dedicated to wildlife conservation issued an order ending the use of lead ammo on service lands within five years.

Director Dan Ashe, a second-generation career employee of the U.S. Fish and Wildlife Service, issued the directive Thursday on the last full day of the Obama Administration. It would require the use of “nontoxic ammunition and fishing tackle to the fullest extent practicable” on lands and waters controlled by the agency by January 2022.

“Exposure to lead ammunition and fishing tackle has resulted in harmful effects to fish and wildlife species,” contends the directive, noting that the mandate to end the use of lead shot in duck and goose hunting in 1991 has resulted in thriving waterfowl populations.

The Ashe order directs regional USFWS managers to work with local, state and tribal agencies towards implementing a wider ban over the next several years.

Few states currently have bans on lead ammo in place, with most of those mandating non-toxic shot only in some state wildlife management areas or for the taking of some non-waterfowl game birds. Only California has a pending complete ban on the use of lead ammunition for any hunting in the state, scheduled to be implemented in stages by 2019.

The Association of Fish and Wildlife Agencies blasted the directive from Washington as “unacceptable federal overreach into the states’ authority to regulate the methods of take for sport fish as well as complete disregard for the states’ concurrent jurisdiction with the Service for the management of migratory birds,” contending it stood to affect rural sportsmen without redress.

Gun rights groups and the trade association for the firearms and hunting industry questioned the timing of the order.

“This directive is irresponsible and driven not out of sound science but unchecked politics,” said Lawrence Keane, National Shooting Sports Foundation senior vice president and general counsel, in a statement. “This directive was published without dialogue with industry, sportsmen and conservationists. The next director should immediately rescind this, and instead create policy based upon scientific evidence of population impacts with regard to the use of traditional ammunition.”

In the past, the NSSF has argued the economic impact of California’s ban on the use of traditional lead ammunition in hunting could triple ammo prices and force hunters out of the sport in that state.

Under the Trump administration, the USFWS will likely fall under the portfolio of Montana Republican Congressman and retired Navy SEAL officer Ryan Zinke, who has been nominated to become the 52nd U.S. Secretary of the Interior. In his term in the U.S. House, Zinke was co-sponsor of several pro-gun and pro-hunting bills including a sportsmen’s package that protected lead ammo use.

Some 40 gun rights and conservation organizations from the American Wildlife Conservation Partners and Fishnet sent a letter of support for Zinke to the Senate Energy and Natural Resources Committee prior to the Committee’s confirmation hearing, which was held last week. He is expected to be confirmed by the Senate.