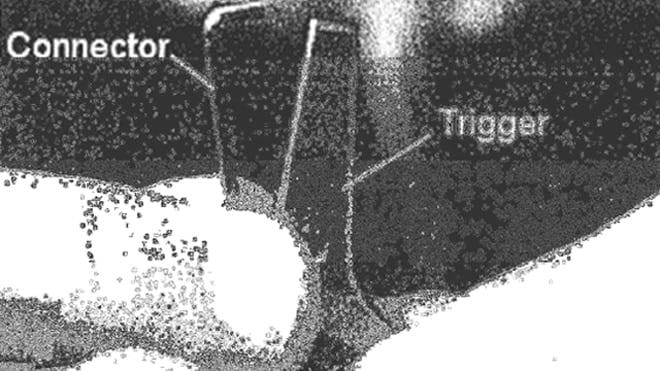 A picture of a picture showing the gap between the trigger and connector of the Walker Trigger Control. (Photo: PACER)

Family of a Wisconsin man killed in a hunting accident blame the Remington 700 rifle that’s now infamous because of a trigger design that’s been linked to numerous injuries and deaths.

Beth Ann Patterson, of Prarie du Sac, Wisconsin, filed a $75,000 lawsuit against the North Carolina gun maker in a federal court last month on behalf of her three children.

According to the amended complaint filed in January, Patterson alleges that her ex-husband, Robert Zick, 32, was killed because the flaws in the 700’s Walker Trigger Control system allowed a round to discharge without the pull of the trigger.

Robert Zick and his brother, Randall Zick, were on a bear hunting trip on Aug. 19, 2014, outside of Ontario, Canada. That day, they were walking on a trial to meet an outfitter. As they approached the meeting point, Randall Zick stopped to unload his rifle.

The lawsuit says Randall Zick “put the stock on his hip and, with his left hand on the forestock, he used his right hand to push the safety to off and started to move the bolt to work the action to unload the subject rifle.”

But as he unloaded, Robert Zick had climbed the embankment to look for the guide and stepped in front of his brother. That’s when the rifle discharged, striking Robert Zick in the back of the head. Randall Zick never pulled the trigger, the lawsuit says.

The lawsuit reiterates details used in other cases about the flaws in the Walker trigger design. Specifically, the lawsuit identifies a gap between components that could allow debris to slip in and prevent the mechanism from functioning properly.

Also, the lawsuit says Remington has for decades failed to correct the issue despite knowing about the issue and the trigger’s designer, Merle “Mike” Walker, confirming that the design feature serves “no engineering purpose other than to make operation of the trigger pull smoother for the user, and to reduce the manufacturing cost of the fire control.”

The Walker trigger has been the subject of scores of lawsuits over the year. Most recently, a class action case from Missouri has forced Remington into a settlement agreement that covers more than 7.5 million Remington rifles. A hearing to conclude the case was scheduled for February, but attorneys general from nine states have raised concerns that the settlement does not adequately address public safety concerns.