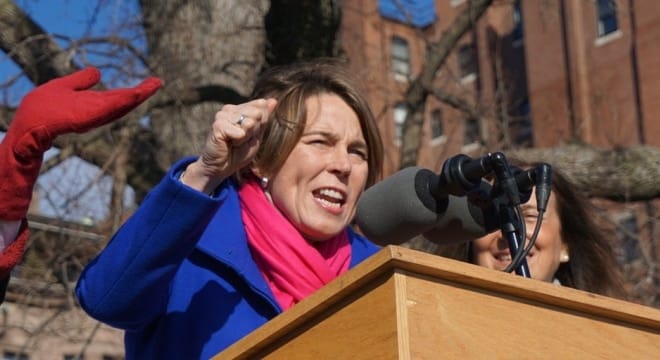 Massachusetts Attorney General Maura Healey is now facing at least two civil suits over her interpretation of what firearms are banned under commonwealth law. (Photo: Maura Healey via Twitter)

The 36-page civil suit filed by the Gun Owners’ Action League against state officials claims Healey’s enforcement action put into place last July retroactively criminalizes some firearms owners and arbitrarily deems some constitutionally protected firearms once considered “Massachusetts compliant” as illegal. While not named as a plaintiff, a release by GOAL acknowledged support of the National Rifle Association with the suit.

“If there is anything positive about AG Healey’s unprecedented and unilateral politically motived attack on lawful citizens, it is that our plight has been pushed onto the national civil rights stage,” said James Wallace, GOAL’s executive director. “The Second Amendment is a civil right and as such cannot be allowed to be abused for perceived political gain.”

The suit names Healey, Gov. Charlie Baker, his director of public safety and the state police superintendent as defendants in an effort to roll back the recent reinterpretation of the Commonwealth’s 1998 “assault weapon” ban.

Last summer Healey announced she was ratcheting up enforcement of the ban by targeting guns whose actions are similar to AR-15s and AK-47s but meet current cosmetic requirements such as being sold without features such as a flash suppressor, bayonet lug or telescoping stock. Contending as many as 10,000 such rifles were sold in the commonwealth in 2015, she added an interchangeability test on gun actions as a tool in her hunt.

The plaintiffs backed by GOAL in the case include five state residents who either acquired or wish to own firearms that prior to Healey’s enforcement action were legal in Massachusetts as well as two licensed gun dealers who would like to sell guns that were recently banned.

Citing state-mandated firearms records, the group maintains the Attorney General’s office knew for more than two decades exactly which types and models of guns were being legally sold in compliance with the commonwealth’s ban. Also, they argue Healey took action to expand the ban “with no explanation for this unprecedented and arbitrary change in enforcement of the pre-existing law.”

The complaint goes on to state that, “The impact of the Notice of Enforcement was to declare that the dealers had conducted tens of thousands of transactions that were illegal under Massachusetts law at the time they were made.”

Healey’s office is already mired in a suit with the National Shooting Sports Foundation over her action which she is seeking a federal court to dismiss, arguing her change in policy is within both the scope of her post and the constitution.

Her office played down the latest claim. “This new lawsuit, the second challenge by the gun lobby, seeks to overturn this 20-year old law,” said a Healey spokeswoman as reported by the Boston Herald. “We will vigorously defend the law and continue our enforcement efforts to protect the people of our state.”