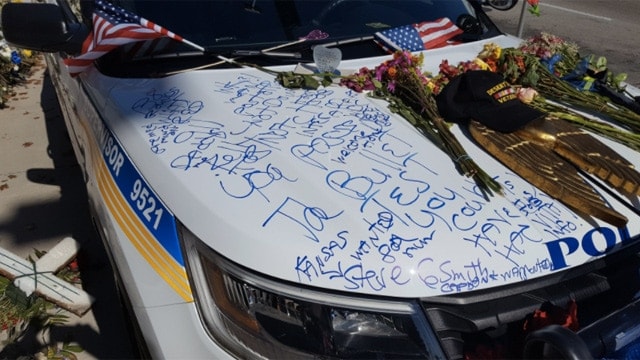 Authorities are investigating after the squad car once driven by Orlando police Lt. Debra Clayton, who was killed in the line of duty earlier this month, was vandalized overnight Thursday.

The car, which was left in front of the police station as a memorial, was covered in hateful words written in blue and flowers previously placed on the car were knocked over.

The car has since been cleaned and the suspect was apparently caught on surveillance video, but the department is reeling over the idea that someone would act in such a manner.

“I’m deeply saddened that someone would vandalize Lt. Debra Clayton’s vehicle,” Orlando Police Chief John Mina said in a statement to CNN. “However, I’m comforted knowing the vast majority of this community loves and respects the Orlando Police Department, and the actions of one pathetic person do not reflect the feelings of this warm-hearted community.”

Clayton’s killer, who was already wanted for the murder of his pregnant ex-girlfriend, was captured following an intense manhunt. He appeared in court the day before the vandalism took place.