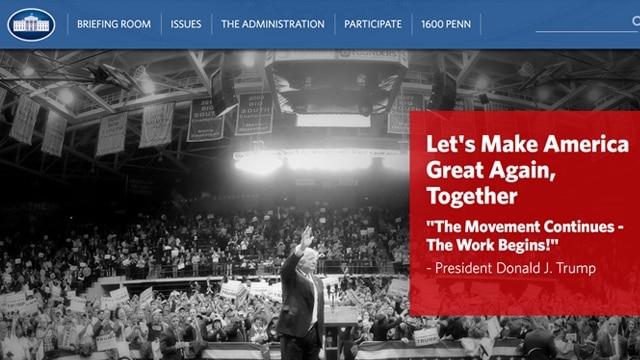 The Trump administration’s revamped White House website promises law and order and the protection of gun rights, as well as several other policy priorities for the new president.

Changes to the website were implemented just moments after President Donald Trump’s swearing in on Friday. In a section titled “Standing Up For Our Law Enforcement Community,” the 45th president outlined his commitment to fighting crime.

Under the previous administration, Attorney General Loretta Lynch and the Department of Justice worked tirelessly to implement reforms to police departments nationwide through consent decrees, legally binding agreements that work to enforce top to bottom changes in law enforcement procedures. DOJ investigations found patterns of police abuses in cities like Baltimore and Chicago, and then worked to implement the decrees.

Trump’s pick for attorney general, Alabama Sen. Jeff Sessions, has called the consent decree process “dangerous” and part of an “agenda that’s been a troubling issue for a number of years.”

The Trump administration’s new policy statement also includes comments that some believe are directed at the Black Lives Matter movement.

“It was chilling to see such unambiguous evidence of his contempt for those who’ve protested against police violence,” wrote Leon Neyfakh for Slate.com. “Insofar as the Obama administration was an ally to Black Lives Matter … Trump has now promised, in his official capacity as the 45th president of the United States, to be its enemy.”

Trump also outlined a commitment to gun rights on the new website, saying his administration will defend Americans’ ability to protect themselves.

“We will uphold Americans’ Second Amendment rights at every level of our judicial system,” reads the post.

The policy position also reaffirmed Mr. Trump’s promise to build a border wall, vowed to end gang violence and sanctuary cities, and said the first duty of his administration will be to fight for the safety of Americans, saying he’ll especially fight for “those Americans who have not known safe neighborhoods for a very long time.”

Other issues outlined on the new White House website include an energy plan, a foreign policy position, a jobs plan, a vow to strengthen the military, and comments on trade deals.