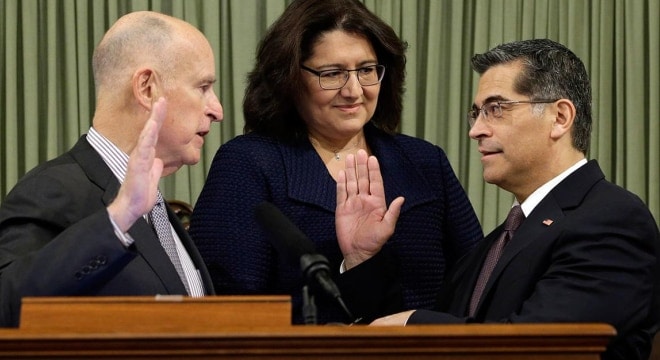 The state legislature confirmed Becerra, who served as the state’s Deputy Attorney General from 1987 to 1990 before running for Congress, on Monday to fill the empty post.

As the new head of the state’s Justice Department, he will likely continue to defend the Golden State’s interests if presented with legal in-roads from a new Trump Administration in Washington.

In the run-up to his confirmation, Becerra, a long-time Democrat, was candid in his eagerness to take on potential challenges from a Republican-dominated federal government. “If you want to take on a forward-leaning state that is prepared to defend its rights and interests, then come at us,” Becerra said.

Prior to his state of the state address delivered to the California legislature Tuesday, Brown swore in the new Attorney General then made clear in his speech the state intended to remain on its current legislative path. “California is not turning back. Not now, not ever,” Brown said.

Gun control groups welcomed Becerra’s appointment, citing he was a proponent for expanded background checks while in Congress and sponsored the National Crime Gun Identification Act of 2008 — a failed federal firearms microstamping mandate.

California’s controversial microstamping requirements for handguns has been a lightning rod for litigation and is blamed for shrinking the number of semi-auto pistols cleared for sale in the state over the past 15 years.

“It is vital that we have leaders who will put gun safety first and Becerra is a gun sense champion of the first order,” said Sara Smirin with the California chapter of Moms Demand Action in a statement. “As he takes office as Attorney General, we look forward to working with him to continue the progress on gun safety in California.”

Second Amendment groups slammed Becerra as an enemy of gun rights, noting that he also voted against the Protection of Lawful Commerce in Arms Act, which shields the gun industry from liability suits in cases of criminal misuse of firearms.

“He’s made it clear that he sees the Second Amendment as a second-class right, not worthy of the same deference as other civil rights,” Craig J. DeLuz, director of communications with the Firearms Policy Coalition, told Guns.com in an email Tuesday. “He’s also committed to working with those of us who disagree with him on gun rights to ensure transparency and accountability in California’s Department of Justice. We look forward to holding him to that commitment.”