Black powder revolvers are fun to shoot, but loading them isn’t always the case. It is definitely easy to note that you will spend more time loading these guns than actually firing them. Measuring out each charge of loose powder and fiddling with a box of balls and a tin of caps isn’t for everybody. Loading these old style fighting guns in this manner is a learning experience and you get to tailor your loads to your needs, but it isn’t necessarily convenient and it does give something of a false impression of history.

In the 19th century, the percussion revolver was usually loaded with paper cartridges and that is especially true on the military side of things. The combustible cartridges, at the time constructed of nitrated paper, was and still is the most convenient way to load these guns in a hurry. Though quite a bit of experimentation, I came up with a way to make combustible paper cartridges on the cheap–no fancy chemical treatments and no special equipment.

The first step of making paper cartridges is having the necessary load data pertinent to your particular revolver. If you have shot your handgun recreationally, it is important to know the proper powder charge and bullet diameter for adequate power and to guard against chain-firing of all the chambers at once. Here is some general data that may be used as a stepping stone:

Small, pocket revolvers like the 1849 Colt and the Colt Baby Dragoon are .31 caliber and therefore have very small chambers allowing for no more than 15 grains of powder with enough room to seat a ball. I have had good luck with .319-inch balls in Remington Pocket Models and .323 inch in the Colts. .330 inch buckshot is a cheap and effective way to get a tight fit and the most accuracy out of these little guns.

The .36 caliber pistols are far more common and popular than the 31 and generally utilize a .375-.380-inch diameter bullet. The chambers will generally allow up to 25 grains of black powder, though 20 is more typical and a load I like to use.

The most popular percussion revolvers today are the .44s, which actually are .45 caliber. A .457-inch diameter bullet or ball will cover most of your bases whether you are running a Colt, Remington, Starr or other Army caliber revolver. I have had great luck with .451- and .454-inch bullets as well. 30 grains of black powder is a good starting point and is typical for firearms like the Colt 1860 and the Remington New Model Army pistol.

Now that you have your load, its time to assemble the supplies to put it in paper, literally. You will need:

Making the mandrel and template 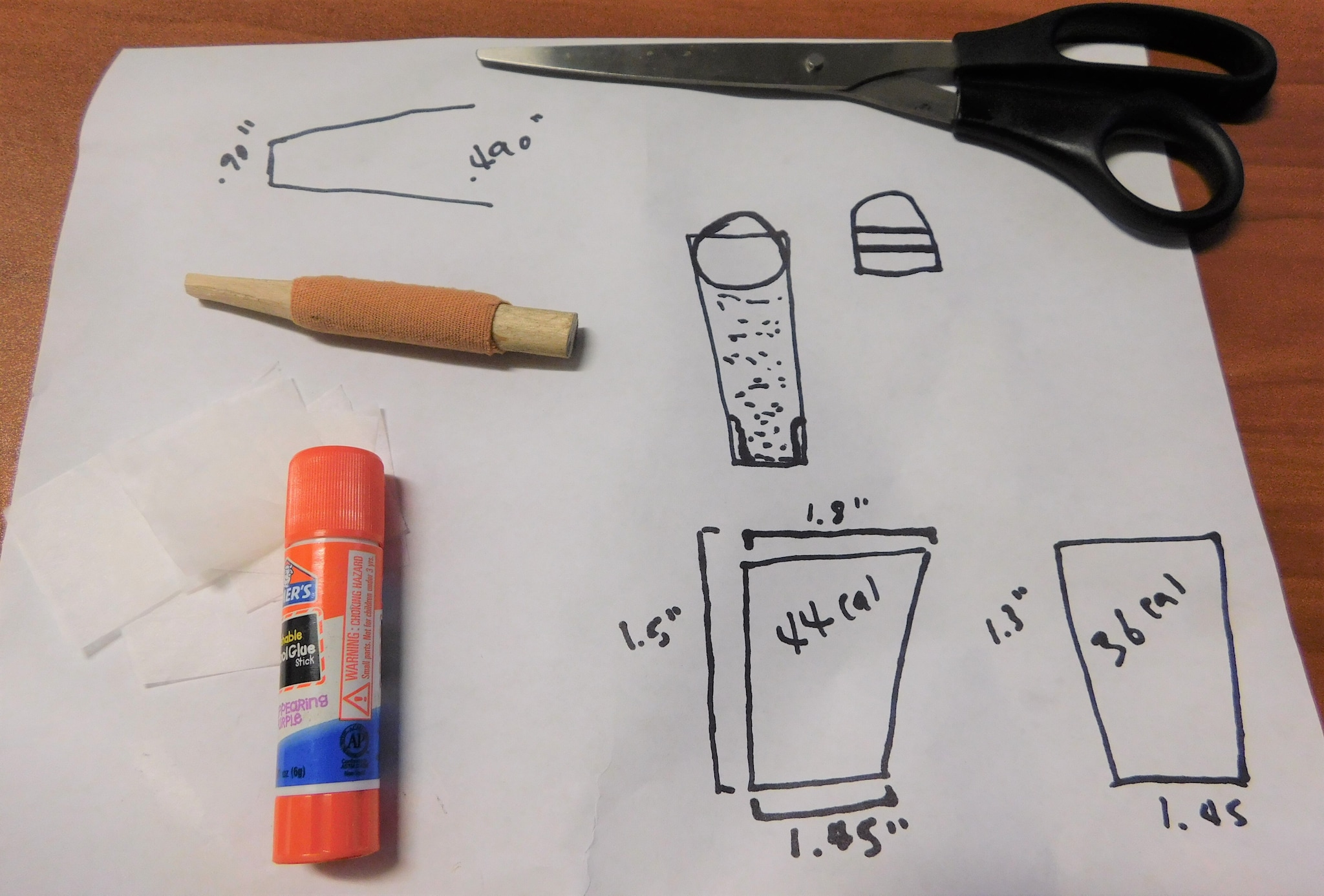 Schematics and materials for the job. (Photo: Terril James Herbert)

The heart of making a paper cartridge is having a mandrel to form the cartridge skins. I took a 7/16 inch diameter soft wooden dowel and marked it off at 1.5 inches. From that point, I carved it down to a taper. I quickly learned that the dowel was too small to begin with, with a .440-inch diameter. A 1/2-inch dowel would be more sufficient.  This makes the 7/16-inch dowel a good choice from 36 on down. I got around this by wrapping one layer of athletic tape around the mouth of the mandrel where it starts to taper. This allows for a .46-caliber bullet with ease. The thin end of the taper came out to .90 inches.

With the mandrel ready, it was time to make a template for the cartridge skins. I wrapped a piece of hard paper, like office paper, around the mandrel tightly and let it overlap by about 1/8 of an inch or so for gluing. The exact amount of excess you allow isn’t so important as to have excess material so that the cartridge skins have enough room for glue. You can reduce your template’s length to 1.3 inches if you want to make cartridges for your .36 caliber revolver.

Using the template, I produce the hair curling paper by the stack and cut it to shape, using the template as a guide. I use hair curling paper because nitrated paper is expensive to make and cigarette paper leaves too much residue and unburned paper in the chambers. Curling hair paper is easy to come by at any beauty shop and burns completely in the chambers.

But what about that toilet paper? I use an approximately 1/2 inch x 1/2 foot amount of toilet paper, either one or two ply, to serve as the back-end of the cartridge. It needs to be thin so the flash of the exploding cap will penetrate it and set off the powder.

Take the piece of toilet paper and put it flat on the mandrel’s small end and wrap it over, running it tightly with the fingers until it forms a cap over the mandrel.

Setting that aside, take a pre-cut piece of tissue paper and glue the shortest end as well as the angled section. Wrap the short end around the base of the toilet paper and pull the long end across the mandrel until it wraps around the thick section of the mandrel.

Pull the new cartridge skin off the mandrel carefully and set it aside for loading.

Take your bullet or ball of choice and grease it with your glue stick.

Add powder to the skin and drop the bullet on top, rolling the loose paper over the bullet with your fingers tightly.

Move onto the next readied cartridge skin and repeat. 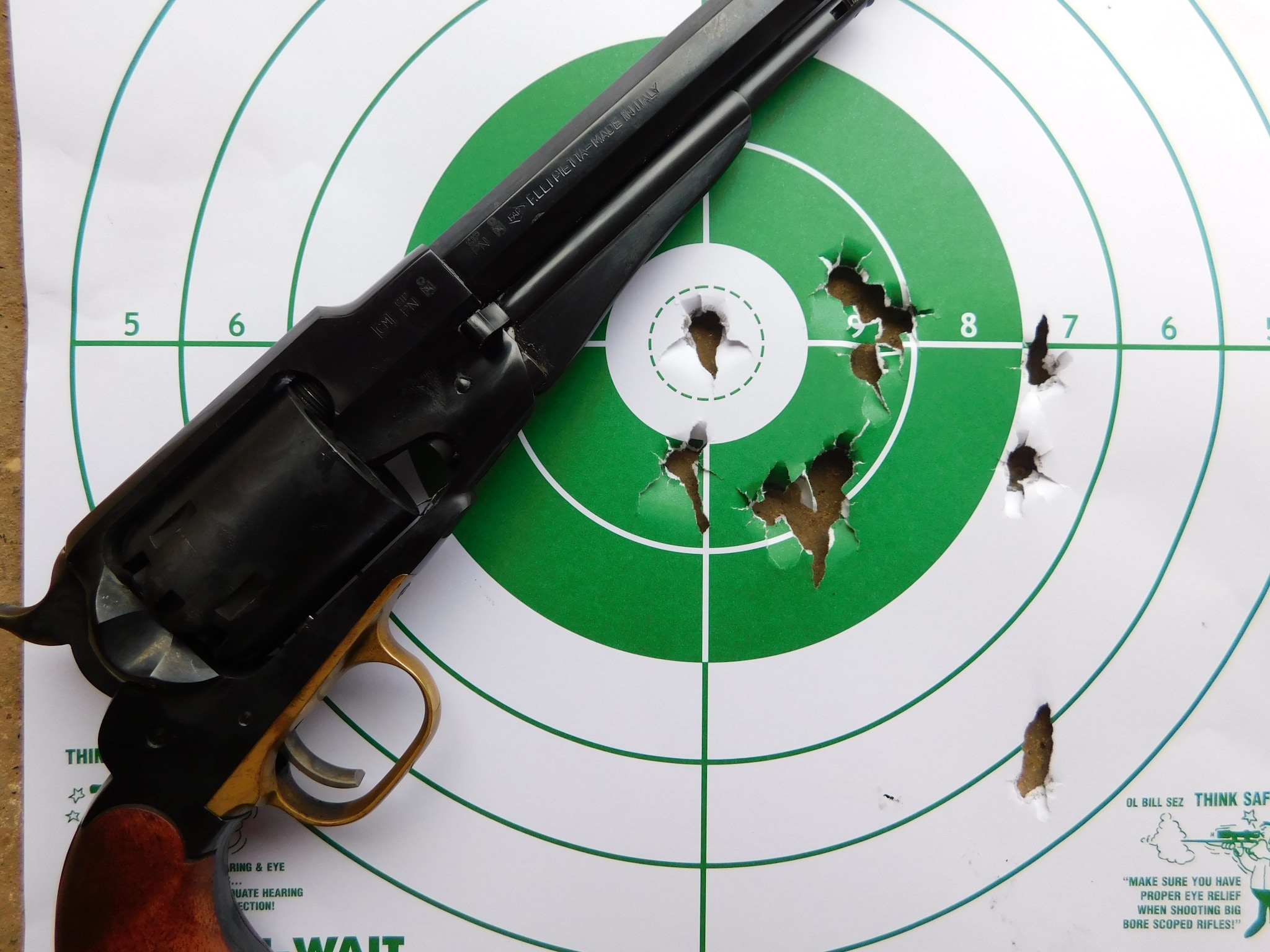 An off hand 12 shot cluster at 7 yards using a .454″ ball over 30 grains of powder utilized in paper cartridges. Ignition was 100 percent! (Photo: Terril James Herbert)

If these little cigarettes of death have any disadvantages, it would be durability. They will survive an impact with the ground, but they should be packed tightly when transporting. In the American Civil War, the containers consisted of a plank of wood with holed drilled in it for each cartridge. I pack the cartridges with extra padding, i.e. a crumpled paper towel, to get them from point A to point B. A good leather belt pouch will suffice for carrying the cartridges out in the field if need be.

Fragility aside, I think I will stick to these paper cartridges. They represent a fast, yet period correct way of loading these smoke wagons and are quite accurate. They also have the side benefit of making you look that much cooler with your black powder revolver on the range or in the field.