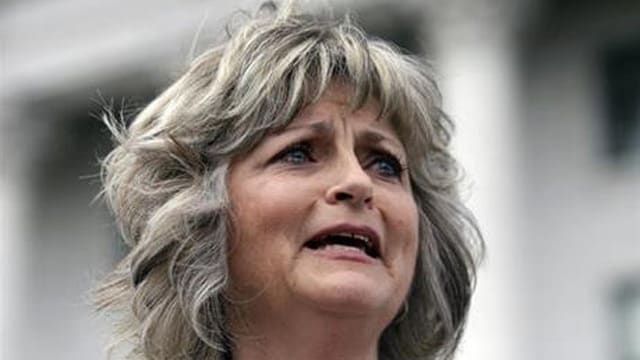 Jeanette Finicum will attend a meeting this weekend in John Day to discuss the same issues her husband was set to discuss the day he was killed. (Photo: AP)

One year after LaVoy Finicum’s death, his widow still stands behind her late husband’s mission and, in fact, plans to finally have the meeting her husband was set to attend on the day he was fatally shot by authorities at a roadblock on a rural Oregon highway.

Jeanette Finicum told the Associated Press attendees at the meeting in John Day on Saturday will discuss property rights, the Constitution, and other topics they feel are important.

“We want to continue with his mission,” Jeanette said. “The people within counties and states should decide how to use those properties, not the federal government.”

LaVoy Finicum was the spokesman for the group responsible for the 41-day occupation of the Malheur National Wildlife Refuge near Burns, Oregon, last year. Finicum was headed to John Day for a community meeting on Jan. 26, 2016, when he sped away from a roadblock and eventually crashed his truck into a snow embankment. Finicum was gunned down after exiting his truck and died on the scene.

A handgun was found in Fincum’s inside jacket pocket and authorities said they opened fire as he reached toward that pocket. But some have disputed that claim, as video recorded from Finicum’s truck shows shots being fired immediately after he exited the vehicle with his hands in the air.

The district attorney concluded the shooting was not only justified but “necessary,” citing the fact that Finicum was armed. However, the Justice Department is still investigating the possibility of FBI misconduct after it was discovered an FBI official fired at least two shots into Finicum’s vehicle, then failed to disclose that he or she did so.

Jeanette, who plans to file a wrongful death lawsuit, maintains Finicum was not a threat and he was instead murdered in cold blood.

The inspector general’s office and the U.S. attorney’s office in Portland both declined to comment on the case, noting that the investigation was ongoing.

Jeanette said since her husband’s death, in addition to moving to the forefront of activism, she’s taken on all of the responsibilities that were once her husband’s, including tending to the family’s massive cattle ranch. “With him gone, all of the responsibilities have fallen to me,” she said. “I spent the year rounding up, branding and calving.”

In the 23 years the couple was married, Jeanette was always a stay-at-home mom. She called the past year “horrific.”

“There’s been so much going on that most people don’t have to deal with when they lose a loved one, like we did,” she said.

When asked if the meeting later this week could lead to another takeover of public lands, Jeanette replied by calling the question ridiculous. “We will peacefully demonstrate, peacefully teach and stand for liberty,” she concluded.

Local officials acknowledged the group’s right to assemble and did not express concern over the meeting.