Company has solvent trap line shut down by ATF 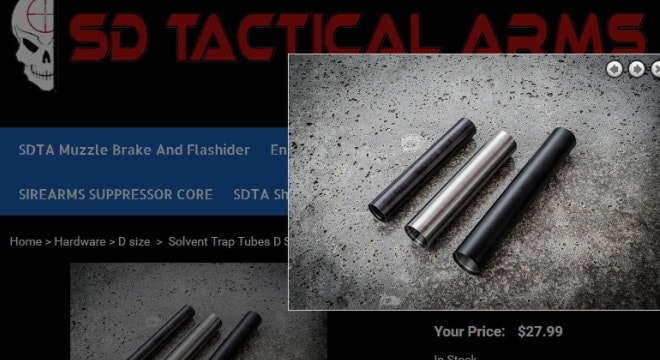 SD Tactical Arms of Prescott, Arizona announced on social media late Wednesday that they are no longer able to sell their popular line of  “solvent traps,” which made up their bulk of their business, as the Bureau of Alcohol, Tobacco, Firearms and Explosives advised they could be interpreted as being unregistered suppressor parts.

“As of today the ATF shut down our business of selling solvent traps,” noted SD. “This is 99% of our income. They have put 3 Veterans, my wife and son out of work. They said I can’t sell freeze plugs. NAPA can’t even sell them to us because they are a suppressor part. They said all I can sell is complete suppressors.”

SD’s website has removed the solvent traps they had for sale, with the links to the offerings now dead. As shown in an archived web cache, the company sold titanium tubes ranging from $27-$91 with the disclaimer that “SD Tactical Arms strongly recommends following all rules set forth by the NFA.”

The company still has their regular NFA-regulated suppressor line listed for sale.

Signing off with the hashtag #Americandreamlost, SD appealed directly to the new President via social media for help.

“My plea for help is to make this Viral to the Trump admin, the Trump family and such. I have been put in the street over mindless opinions. I had talked to the ATF in the past and they had no issues. Today they shut us down,” reads the post.

In responses to comments, SD advised the ATF did not get a copy of their customer list and that, “If the hearing protection act passes we are good. If not I will probably be out of business.”

In a separate post, store officials repeated what appears to be the text of a letter from the ATF’s Firearms Industry programs Branch (FIPB) which noted that:

The stated intent of a solvent trap is to catch and trap gun cleaning solvent during bore cleaning operations commonly performed on firearms. Solvent traps do attach to the muzzle of a firearm but do not have any design features intended to allow a bullet to pass through them. Since as originally manufactured they are not intended to silence, muffle or diminish the report of a portable firearm they are not silencers..

Gun trust lawyer David M. Goldman, in a 2015 post on his website, warned that solvent traps when used exclusively as a cleaning device are legal, but that the overall concept of the kits are on shaky ground when it comes to the NFA, noting that “The problem is that most people who purchase them intend to use them as suppressors or parts to a suppressor and not as a solvent trap. Even those who do not intend to use them as suppressors, sometimes do.”