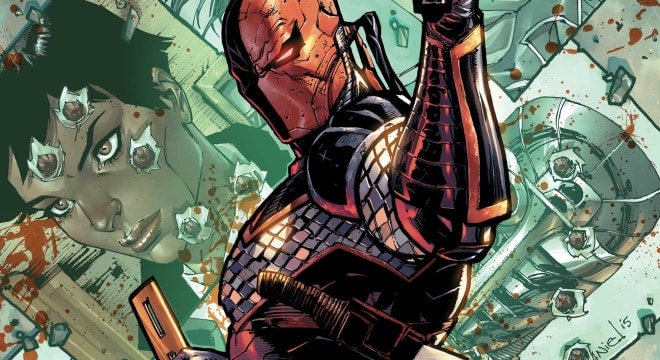 DC Comic’s Deathstroke #11, released this week, is entitled “Chicago” for what the Justice League marketer bills as “an unflinching look at gun violence in America.”

Described by The Chicago Tribune‘s Christopher Borrelli as being something akin to DC’s take on Marvel’s more well-known Punisher antihero, Deathstroke is just visiting the Windy City for a single issue, “hired by 200 Chicago moms to avenge their dead children, all victims of gang violence and police shootings.”

The Trib interviewed Deathstroke writer Christopher Priest and artist Denys Cowan about the special installment in the series.

“If you’re going to do an anti-violence Chicago story, what better place than in DC’s most violent comic?” said Priest as part of the interview, saying he was influenced by reports of weekends of violence in the city. Cowan, for his part, said that Deathstroke– a super soldier turned hardened killer– was a good vehicle to be “a meditation on effects of violence, and the very nature of violence and gun ownership.”

Deathstroke’s answer to gun control in Chicago: “Better aim” though the Preist is quick to point out “That’s Deathstroke speaking. You have to be true to the character. It would be wrong for Deathstroke to say we should all put our guns down.”

You can expect a lot more of the character in the future. Actor Joe Manganiello is slated to appear as Deathstroke in Ben Affleck’s upcoming solo Batman movie.

Speaking of which, when the trailer for DC’s Wonder Woman movie dropped last November the HuffPost felt it was a new anthem to gun control.