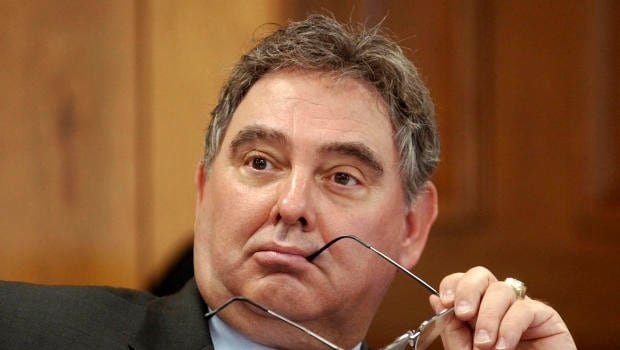 Georgia Rep. Gerald Greene, D-Cuthbert, listens to cost-cutting suggestions during a meeting in Atlanta in 2003. Greene was shot on Thursday behind an adult entertainment store in Columbus, Ga. (Photo: AP/Erik S. Lesser)

Georgia lawmaker Gerald Greene, R-Cuthbert, is recovering from a gunshot wound he suffered during an armed robbery attempt in Columbus, Georgia, on Thursday.

Greene, 69, was traveling from the state capital to his home in Cuthbert carrying thousands of dollars in storm relief funds from the American Red Cross when he stopped for gas in Columbus. He told local news station WRBL-TV that he was in the parking lot behind adult entertainment store Foxes Cinema and was planning to visit a nearby liquor store for lottery tickets.

Greene alleges that while in the parking lot a black male in a grey hoodie approached him, pointed a gun at his chest and demanded money.

Greene said he refused to give up the cash and instead threw his cell phone at the suspect. The man fired a round out of a silver .22-pistol, striking Greene in the leg. The Georgia lawmaker hobbled to his car and drove to the liquor store where employees called police.

Greene was transported to Midtown Medical Center to receive treatment for his gunshot wound. He was released late Thursday evening.

Harish Bherida, owner of the liquor store, told WRBL-TV that crime is on the rise. “In this area (crime) is increasing, it’s increasing day by day,” Bherida said.

He added that Greene frequents his store often and has been a good customer. “He’s a regular customer, he comes sometimes two times a week, sometimes three times a week. He’s a very good guy. He always buys good stuff. He’s never given me a problem.”

Portions of Greene’s district were devastated by a tornado that claimed 21 lives across the Southern states last weekend. Georgia Gov. Nathan Deal said Thursday that President Donald Trump will grant federal aid for six counties in Georgia ravaged by the storms. Greene was carrying thousands in relief aid from the American Red Cross at the time of the shooting. None of the money was taken during the robbery attempt; however it is unclear why Greene was transporting the donated funds from his office in the capitol to his home in Cuthbert.

“Given this is an ongoing investigation, we would kindly refer all questions on the case to the police,” American Red Cross spokeswoman Mindy Mizell told The Associated Press.

Despite his injury, Greene is set to resume his legislature duties next week.