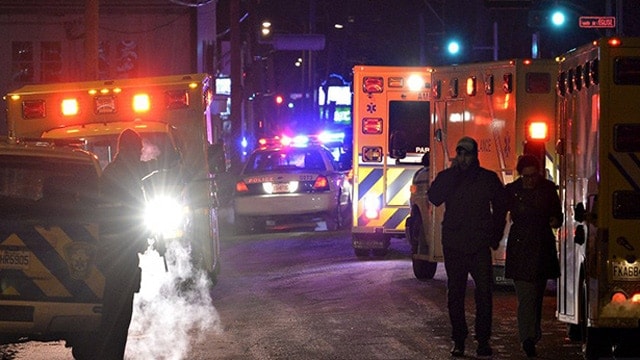 Police investigate after a deadly shooting at a mosque in Quebec City, Canada. (Photo: Francis Vachon/AP)

A shooting at a mosque Sunday evening in Quebec City left six dead and eight injured, according to The Associated Press.

Authorities have the two suspects in custody responsible for what Prime Minister Justin Trudeau called a cowardly attack and an act of terrorism.

Quebec City police spokesman Constable Pierre Poirier said the mosque was evacuated and no other suspects are believed to be at large.

The chaos unfolded in the men’s section of the Quebec City Islamic Cultural Centre during a prayer meeting attended by more than 50 people. One suspect was arrested at the scene, while the second was located in d’Orleans, Quebec, about 30 miles from where the shooting took place. Few details, including the names of the suspects, have been released.

Quebec provincial police spokeswoman Christine Coulombe said the deceased victims were 35 to 70 years old and many who were injured suffered life-threatening injuries. The names of the victims had not been released as of late Sunday night.

“It is heart-wrenching to see such senseless violence,” Trudeau said in a statement. “Diversity is our strength, and religious tolerance is a value that we, as Canadians, hold dear.”

Trudeau added that such “senseless acts have no place in our communities, cities and country” and offered condolences to the friends and families of the deceased while wishing for quick recoveries for those who were injured.

The attack came amidst increased tensions and massive protests in the United States against temporary travel restrictions issued by President Trump. The restrictions, which some have dubbed a “Muslim ban,” target individuals traveling into the U.S., including refugees, from more than half a dozen countries with heavy Muslim populations, including Iran, Iraq, Libya, Somalia, Sudan, Syria, and Yemen.

The day before the shooting, Trudeau, in a presumed reaction to Trump’s restrictions, stated via Twitter, “To those fleeing persecution, terror & war, Canadians will welcome you, regardless of your faith. Diversity is our strength #WelcomeToCanada.”

Authorities have not released a motive for the attack, but, although it’s unclear if the acts are related, the head of a pig was left on the doorstep of the mosque last summer during Ramadan, a traditional Muslim holiday.